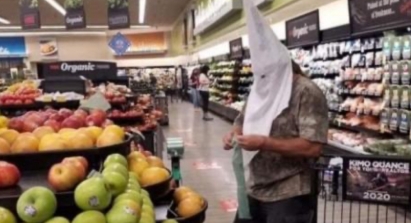 May 5, 2020 (Santee) -- I grew up in San Diego's East County. I lived and went to school in Lakeside. Over the years I lived in Santee, the SDSU College area, Pacific Beach, Ocean Beach, Hillcrest, La Mesa, Lemon Grove, El Cajon and Julian. I currently own a home in Lakeside.

My first apartment in the early 1980s as a young guy living with my then-girlfriend was in Santee. I worked at a local small grocery-market that delivered kegs of beer to customers, and the owners were a decent elderly couple who had moved from Los Angeles because they loved the pace and the nature of small town life.

The overwhelming majority of people of East County are decent, good people who would never resort to racial hatreds and bigotries. They hate that garbage as much as anyone else.

But I have seen and heard racist behavior all my life. All throughout San Diego.

In recent years it has gotten worse. Donald Trump's election has emboldened language and "jokes" that most of my life were reserved for small gatherings of people when they thought nobody was listening.

So when I see that some clown decides to wear a Ku Klux Klan hood in a Santee Vons - no doubt thinking it would be a real funny thing to do and most people would think him clever for such a joke - I am not shocked.

Frustrated that this sort of garbage still exists.

Furious that this knucklehead still lives in a world where he’s told he has a great sense of humor and winked at by others for the supposed “statement” he’s making about standing up against big government and political correctness.  Encouraged by a president of the United States who says when he sees Ku Klux Klan and Neo-Nazis marching to protect symbols of the Confederacy in Charlottesville that “there were good people on both sides” of the debate.

It is a good thing that so many have publicly condemned this man in the Vons in Santee for wearing a KKK hood in public. Maybe that is a sign things have improved a little. But ask yourself every time you hear racist language or see racist behavior when you are in small gatherings and nobody is watching - is this really who we are?