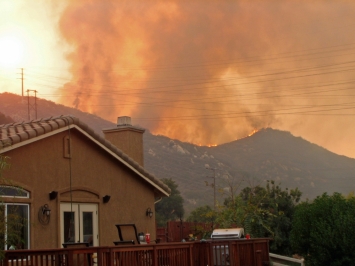 Measure A will NOT limit the construction of much-needed new housing in areas already approved for development in the General Plan. The plan already includes the opportunity to build 60,000 housing units ranging from apartments to single-family homes.

There are plenty of safe areas to build houses in the county. But if we build homes in locations that are known to burn – they’re going to burn.

Who can forget the images of people trying to escape the 2018 Camp Fire who were stuck in their cars as the fire advanced? Some of those people burned to death in their vehicles. That tragedy happened in part because there was inadequate road infrastructure to evacuate Paradise. At its peak, the Camp Fire spread by more than the length of a football field every second as embers blew a mile or more ahead of the fire front. Eighty-five people died in that fire and tens of thousands of people lost their homes.

Many of us also remember the massive 2003 Cedar Fire and the 2007 Witch and Harris Fires right here in San Diego County. People in those fires faced a similar situation: flammable homes built on a flammable landscape and a road system not up to the task of evacuating everyone who lived there. Thousands of people lost homes and livestock in those fires.

There is a reason why backcountry areas of San Diego County are zoned for low-density housing. So why are we even having this conversation?

Land speculators have learned that they can buy up rural land on the cheap that’s zoned for agriculture, open space and low-density residences. Then they go to the Board of Supervisors to secure a General Plan Amendment and build massive sprawl developments. These developments don’t help with the affordable housing crisis, as lower-income people can’t afford to buy them; they require taxpayer-funded new infrastructure to support them; and they often have inadequate roads for fire evacuations. One example of this scenario is the infamous Lilac Hills Ranch, where the developers proposed to build 1,700 homes in a fire-prone area zoned for about 100 homes. Another is Harmony Grove Village South, where the supervisors inexplicably approved a housing project that lacks secondary access despite the fire code requiring it—and in a dead end where 30 homes burned down in 2014’s Coco’s Fire.

In light of these facts, why do our county supervisors keep approving these high-risk sprawl developments? Certainly, they see the need for more housing. But don’t they also see that building lower-cost housing in areas that already have fire stations and adequate evacuation routes, and proximity to schools and jobs, is a better option?

Perhaps the supervisors want to believe in the best possible outcome. Perhaps they are stuck in an old-fashioned “pioneer mentality,” that everyone in the West deserves space to spread out. If so, they need to face the facts. The catastrophic fires that have swept through California’s rural areas in recent years have proven that a more cautious approach is required.

If you care about your safety and that of your neighbors throughout San Diego County, please join us in voting Yes on Measure A in the March 3rd election.

Nona T. Barker is a retired fire captain for San Diego County Service Area 107. Richard W. Halsey is the Director of the California Chaparral Institute, a non-profit organization focusing on the ecology of California’s chaparral ecosystems and the dynamics of wildland fire.

The developers are proposing to profit from future fire costs being laid upon taxpayers, ratepayers and insurance companies. It is a business plan that includes further transfer of wealth from the many to the few. If you want to make money, that is fine. Innovate, create some new value. You are not really making new value if you are backing your private profit with public risk and suffering, degrading the environment and destroying the backcounty with ill advised, unsafe deviations from the general plan. The great news is that the voters saw right through Lilac Hills, and will see right through the opposition to Measure A as well. Vote yes on A.