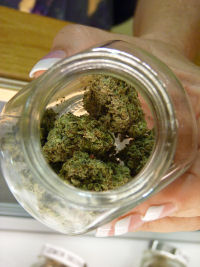 November 8, 2011 (San Diego)--In an earlier Op Ed I pointed out that according to the U.S. Constitution, the Federal government has no legal right to impose criminal law on marijuana both grown and sold within the State of California (Reader's Editorial: Medical Marijuana and States Rights, October 25, 2011, http://www.eastcountymagazine.org/node/7674).

Gil Kerlikowske, Director of the Office of National Drug Control Policy, cited the National Institute of Health’s research findings that marijuana use is “associated with addiction, respiratory disease and cognitive impairment.” "Director Kerlikowske’s statements leave out “compared to what?” and “what is the benefits to risk ratio? I could make statements similar to his for many currently legal drugs, ignoring the suffering that would follow should they be declared illegal."

In the first place he leaves out “compared to what and what is the benefits to risk ratio?” Below I have cut and pasted excerpts from the summary of a comprehensive review of the scientific literature on marijuana produced by the Institute of Medicine (Note: one can register for free and then download all IOM complete reports for free):

Medical Benefits:
The accumulated data indicate a potential therapeutic value for cannabinoid drugs, particularly for symptoms such as pain relief, control of nausea and vomiting, and appetite stimulation.
The effects of cannabinoids on the symptoms studied are generally modest, and in most cases there are more effective medications. However, people vary in their responses to medications, and there will likely always be a subpopulation of patients who do not respond well to other medications. The combination of cannabinoid drug effects (anxiety reduction, appetite stimulation, nausea reduction, and pain relief) suggests that cannabinoids would be moderately well suited for particular conditions, such as chemotherapy-induced nausea and vomiting and AIDS wasting.
Psychological Effects:
The psychological effects of cannabinoids, such as anxiety reduction, sedation, and euphoria can influence their potential therapeutic value. Those effects are potentially undesirable for certain patients and situations and beneficial for others.
Physiological Risks:
Marijuana is not a completely benign substance. It is a powerful drug with a variety of effects. However, except for the harms associated with smoking, the adverse effects of marijuana use are within the range of effects tolerated for other medications [my emphasis]. The harmful effects to individuals from the perspective of possible medical use of marijuana are not necessarily the same as the harmful physical effects of drug abuse.
Although few marijuana users develop dependence, some do. Risk factors for marijuana dependence are similar to those for other forms of substance abuse. In particular, antisocial personality and conduct disorders are closely associated with substance abuse.
CONCLUSION: A distinctive marijuana withdrawal syndrome has been identified, but it is mild and short lived. The syndrome includes restlessness, irritability, mild agitation, insomnia, sleep disturbance, nausea, and cramping.
Does Marijuana Use Lead to Subsequent Abuse of other Illicit Drugs?
In the sense that marijuana use typically precedes rather than follows initiation of other illicit drug use, it is indeed a “gateway” drug. But because underage smoking and alcohol use typically precede marijuana use, marijuana is not the most common, and is rarely the first, “gateway” to illicit drug use. There is no conclusive evidence that the drug effects of marijuana are causally linked to the subsequent abuse of other illicit drugs.
Finally, there is a broad social concern that sanctioning the medical use of marijuana might increase its use among the general population. At this point there are no convincing data to support this concern. The existing data are consistent with the idea that this would not be a problem if the medical use of marijuana were as closely regulated as other medications with abuse potential. (Free Executive Summary: “Marijuana and Medicine: Assessing the Science Base,” 2003, http://www.nap.edu/openbook.php?record_id=6376 ) Note. A version of the study was released the following year for the general public, “Marijuana As Medicine? The Science Beyond the Controversy (2000).
As should be obvious from the above, Director Kerlikowske’s claims are quite inaccurate. Yes, marijuana has some risks; but not greater and probably less than many other legal drugs. One risk, of course, is lung damage; but smoking is legal and cigarettes cause the same harm; but without conferring ANY medical benefit whatsoever. As for addiction, marijuana poses far less a risk than even many legal drugs. And there is NO evidence that it leads to use of more dangerous drugs. In addition, Drug Czars and other politicians have claimed they are open to what research finds; but the Federal government over the past 30 – 40 years has made it almost impossible to get permission to conduct research on marijuana. Hypocrisy rears its ugly head.
My mother died from cancer. At first she took Tylenol with Codeine. Codeine, of course, is illegal as a street drug. Later she took morphine, again illegal as a street drug. It is inconsistent to decide that certain drugs that could potentially be used for recreation because of their medical benefits should be legal and others not so. Even more so, given, as mentioned in the IOM report, that some people do not benefit from the current array of available drugs; but do benefit from marijuana, it is cruel to allow them to suffer. First and foremost the goal should be to alleviate human suffering as much as possible.
To summarize: Medical marijuana does confer benefits on patients. The risks are minimal, in most cases less than many other both legal and illegal drugs. And finally, Federal raids on State grown and sold within the State marijuana is a violation of the U.S. Constitution.
Joel A. Harrison, PhD, MPH, a native San Diegan, is a semi-retired epidemiologist.  He has worked in the areas of preventive medicine, infectious diseases, medical outcomes research, and evidence-based clinical practice guidelines. He is currently active in supporting the adoption of a single-payer health care system in the U.S. For more information on single-payer go to Physicians for a National Health Program’s website at www.pnhp.org. The views in this editorial reflect those of the author and do not necessarily reflect the views of East County Magazine. To submit an editorial for consideration, contact editor@eastcountymagazine.org.

It is outrageous to have the federal government ban stores from selling legally-grown marijuana to adults when this ban *doesn't* prevent people from buying, selling and using marijuana, and *does* make marijuana readily accessible to children by creating large profits for drug dealers where otherwise there would be NONE.