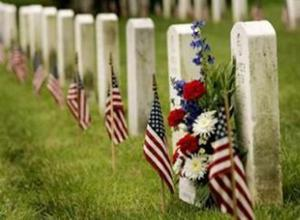 May 24, 2015 (El Cajon)-- Tomorrow is the annual day of remembrance for those that have gone before us and given “all” for our freedom and the liberties that we enjoy.   You are all welcome to join us for a short ceremony at the El Cajon Veteran’s Memorial.

We usually start getting there about 10:30 so we have some time to talk and provide some insights into how we remember and celebrate this day.  The ceremony will start at 1100 and we will be going to The Home Town Buffet on W. Main Street in El Cajon afterward.

We also need to take a few moments to thank those still serving in the War against Terrorism.

Say thanks to a veteran, and pay respects to a fallen soldier.

Memorial Day 2015 is here, and the time has come to pay respect to the men and women who have fallen in combat over the course of American history.

Observed on the last Monday in May, Memorial Day offers Americans everywhere a chance to remember the men and women who have been killed in past American wars. It has also become tradition to not only place American flags on the graves of those who fell during combat, but also on the tombs of all veterans.

The history of Memorial Day in the U.S. goes back over a hundred years, with numerous cities holding days of remembrance for the end of the Civil War and for the soldiers who had fallen on both sides. Animosity still existed between North and South, though the day of remembrance soon came to be observed by both sides and then by the nation as a whole once wounds began to heal.

The day of May 30th was allegedly picked because it was NOT the anniversary of a battle.

For many years the holiday was known as Decoration Day, but the term Memorial Day became official in 1967.

For most people, the holiday is spent visiting the graves, tombs and mausoleums of veterans, with the nation taking a moment of silence at 3 p.m. local time.

With the country currently at war, America should give some of its thoughts and well-wishes also to the soldiers serving in Iraq and Afghanistan, as well as veterans who've made it home.

If you can read this, thank a teacher. You are reading it in English, thank a Veteran!

Special thanks to Legionnaire Bill Brennan for sharing the following link with us:!  "Before You Go"   . Click on  http://www.managedmusic.com/php/BYGIndex.php?page=playBYG  or copy Beforeyougo.us to your browser to see and hear the tribute to our current and past veterans.  There is both a Vietnam Veteran and WW II Veteran Version on the web site.

God Bless America and all the Veterans of our Armed Forces.

but stop pretending they died "for our freedom and the liberties that we enjoy."