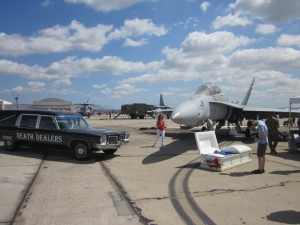 September 19, 2018 (Ramona) -- The US war spending, now approaching $1 Trillion annually, (1) directly impacts how we pay for schools, Medicare, Medicaid, social services and our poor and elderly (7).  We at the San Diego Veterans For Peace take the position that the resultant $22 Trillion national debt (2) created by lavish spending on war making is pitched as a good thing at the Miramar Air Show.  War made palatable with glorious pageantry and emotional thrills that can’t be topped.  This is why we ask the public to just stay home.

Worse yet the Miramar Air Show pageantry is targeted at our kids, like a man offering a child candy to get in his car, the military entices our children to believe that war making is splendid, something to aspire to.  Our children are taught to mock death with crass displays like the Death Dealers (3) coffin and hearse decorated with skeletons and parked next to an F18.  At the Miramar Air Show indiscriminate killing is shown as fun and that sinister pitch is made even more clear in this video.  http://learnfromvets.com/ 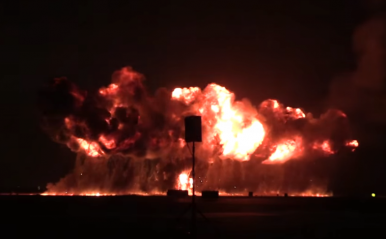 The Miramar Air Show makes war, even nuclear war, look like a good idea with an additional projected spending of $1.7 Trillion (5) over the next 30 years.  This vast sum to be spent on modernization of our strategic nuclear arsenal will create even more debt to burden future generations.  This irrational spending is happening despite the understanding that the detonation of as few as 1, but no more than 20 nuclear weapons (6) likely will create an atmospheric dust storm that will kill crops and trigger the starvation of 1 Billion of our fellow earthlings.  At the air show it looks like the war machine is making us safer, but the reality is that our disruptions of other people’s lives is making the world much more dangerous for everyone, as seen in the recent floods of refugees and the birth of ISIS.

This is the 3rd year that Vets For Peace reaches out to the public to stay home from the air show, and already we have seen changes as a result of our efforts.  The wall of fire, (4) an unbelievably dangerous and environmentally toxic display was eliminated.  The number of heavy machine guns that kids could play war on has been drastically cut back, and the simulator where kids in face paint could call in air strikes on terrorists has been removed.  These changes however do not eliminate the emotional appeal of war on kids, and the only way to stop that it is to do something more wholesome with our children.

What the air show doesn’t show are the costs of war, such as statistics regarding military and Veteran suicides, the number of wounded and maimed, nor the number of innocent civilians whose lives have been disrupted by our endless war making.   There are divergent roads that form at the entrance of the Miramar Air Show.  Endless war, pain, death and debt, or the road to peace and prosperity.  We ask the public to choose the latter for the betterment of our people and the entire world, just by staying home.

(3) 2017 Miramar Air Show, Death Dealers display, where killing is shown as fun.  Photo by Dave Patterson, Ramona.  This photo is free to use.

(7) Cutting of budgets to pay for war

Dave Patterson  is a Ramona resident, past president and coordinator of the No Miramar Air Show project (NoMAS), and San Diego Veterans For Peace

You can't possibly be serious?

Look, I support our vets.  But to deny other people a good time because it makes you uncomfortable?