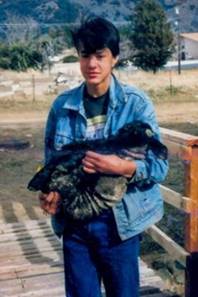 June 3, 2019 (Santa Ysabel) -- The sheer volume of missing and unidentified person cases poses one of the greatest challenges to agencies tasked with resolving these type of cases. Over 600,000 individuals go missing in the United States every year.

Many missing children and adults are quickly found alive and well. However, tens of thousands of individuals remain missing for more than one year. These are what most "agencies" consider "cold cases."

My son, Shawn Lone Wolf was one such case. My son became that unidentified body.

In 1991, my son Shawn Lone Wolf (Coyote),Christman, left his uncle’s house, in California. He was not seen again.  Shawn was the wandering type. He was one of the kids who followed the rock and roll band " The Grateful Dead". He sold macramé belts, plant holders and other associated goods that the "hippie" type like.

Year after year, in California I made requests to the local law enforcement to submit a missing person's report. I had no idea what the steps were in filing such a report. More alarming was the fact that each time an officer who responded to my house, my request for a missing person report for my son fell on deaf ears. No one ever actually wrote anything down. They stood in my living room with pen in hand, wrote something on their paper. Never was it the name of my son.

That was almost 26 years ago. No one should have to go through that kind of anguish. No one should be treated with such disrespect. One officer took me aside about five years or six years ago, told me to quit bothering them, that my son did not want to talk to me, and to leave him alone. All the while my son was already dead, laid to rest in a "John Doe" grave in Gary Indiana.  My son was found June 20,1993 floating in Lake Michigan,  Chicago found him but, Gary, Indiana buried him.

The National Missing and Unidentified Persons  System, or NamUs,  is a national information clearinghouse and resource center for missing, unidentified, and unclaimed person cases across the United States. It is funded and administered by the National Institute of Justice and managed through a cooperative agreement with the UNT Health Science Center in Fort Worth, Texas. All NamUs resources are provided at no cost to law enforcement, medical examiners, coroners, allied forensic professionals, and family members of missing persons.

This is where it just doesn't go far enough. Missing and unidentified person cases in NamUs are automatically compared to locate potential matches based on dates, geography, and core demographic information. The trouble is that someone has to actually TAKE

THE REPORT AND FILE IT. The person trying to file the report has to know where the person went missing from. In my son’s case, I had no idea he was in Illinois.

It is up to each individual agency and each individual officer weather the agencies protocol is followed. It just isn't mandatory for them to follow each step to take DNA or to enter it into the "NAMUS" database.

I hear that when a crime is committed, the criminal has to submit their DNA to be cross referenced in cases where DNA evidence was collected nation wide--not just in the county or state where the persons crime took place in. When someone requests that a report be taken, shouldn’t that officer at least submit the report?  It should be mandatory for DNA of unidentified remains to be automatically entered into the Namus database. If requested family members, that wish to submit their DNA for comparison, it too be entered into the NAMUS database for the possibility of making a match. This would be such a powerful tool in missing persons reporting and unidentified remains recovery?

This should be the standard protocol used across the board in these situations. It should be law.

I know more people would be able to finally have answers about their loved ones.

I feel those unidentified remains and those people looking for loved one could be given a small bit of dignity by making this “Standard Protocol”, a federal law. They deserve at least equal attention law enforcement gives to criminals when researching their identity or suspected past.

My heart is saddened by your loss - condolences to you and your family. I always wonder why some people in positions of power or authority, seem to be so indifferent to the plight of others. At a time when you needed police assistance desperately, they simply did not care. And that officer who told you the lie about "your son not wanting to talk with you and leave him alone", should be terminated and prosecuted for what he did. May you find some peace someday...