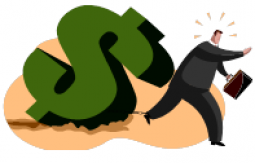 October 9, 2013 (San Diego) As things go, this is not precisely the best of news. Fidelity has sold a lot of its government debt. So reports the Journal Sentinel.  Money market portfolio managers at Fidelity Investments have been selling off their government debt holdings over the last couple of weeks, said Nancy Prior, president of Fidelity’s Money Market Group. While Fidelity expects the debt ceiling issue to be resolved, the Boston-based asset manager said it is taking steps to protect investors.

Prior said that Fidelity no longer holds any U.S. debt that comes due in late October or early November, the window considered by many investors to be the most exposed if the government runs out of money and defaults on its obligations.

Now this is very dangerous news, since it means Fidelity is getting ready for the other shoe to fall. As we have been speaking here of the effects of this Constitutional Crisis, and how a minority of the minority does not believe this is actually serious. How could this affect you and me? We could see a crash, quite brutally honest. This is not good news. In fact, this is very scary news.

For the billionaires and millionaires of the world, they will see some effects in their income. In reality they can even switch savings from one nation to another and even switch the denominations in which their savings are invested. The rest of us are not so lucky. In a crash, and a few are speaking of this being as bad or worst potentially than 2008, we could be exposed to an actual depression.

David Dayen writing for Salon puts it this way:  The day after the financial crisis, there was general agreement on the need for emergency measures — and we got TARP and the stimulus. (There may be reason to be disappointed in both, but emergency measures were taken.) The day after a default in 2013 — or at least the day when the consequences become clear — this Congress is likely to do nothing. No stimulus, no bank recapitalization – nothing — in Hoover Congress-like fashion. And that’s the real fear: not just the dire consequences of a debt default, but the expected lack of response. That way lies depression.

The truth is we don’t have a Congress willing to take the necessary steps to intervene and mitigate a crisis, self-created or not. The usual tools available to stave off a recession – like government stimulus – have been mocked and savaged, not just by House Republicans, but by a deficit-obsessed establishment. And the rising opposition to bailouts likely takes them off the table, at least in an overt way. Washington’s reaction to these disasters is precisely what makes avoiding them so critical.

He goes on to explain this in this way. If one of the missed payments is to a holder of U.S. debt, then you have a default event that could cause credit markets to freeze, the U.S. dollar to plummet, and financial institutions to struggle to secure short-term lending on which they rely.

What Fidelity just did seems to signal the beginning of this nightmare scenario. I am aware that the House is using a right, a duty, a power, given in the Constitution, the power of the purse. What they are doing though is ideological and might cause the greatest overt crisis in modern American history. There is only one conclusion on this, there lies madness.

For the sake of ideology, a lot of people will be hurt. It is not out of the realm of possibility that a lot of people might even die. Those who have nothing less to lose might even commit desperate acts. In this sense I mean food riots. They did happen during the Great Depression. Buckle up, things are about to get very bumpy.