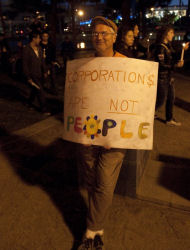 October 29, 2011 (La Mesa)--What’s happening to our nation?  Why are thousands of demonstrators gathering in hundreds of parks and public places with signs and slogans proclaiming everything from, “I AM THE 99%!” to “They got bailed out; we got sold out!”

The explanation is really quite simple:  People have finally realized that their lack of jobs, loss of property and 401K value, and even their lack of food is not something of their own making.  It is really because the 1% of the population that has most of the wealth and power, has rigged the economic system to ensure their continued wealth and power at the expense of the rest of us, the 99%. The latest  actions by Wal-Mart are  prime examples of putting corporate greed over people in need.

A recent CBS Evening News report (10/21/11) revealed just how badly the system can be rigged against individuals.  Wyatt Andrews reported that Wal-Mart, the largest retailer in the world, has announced to employees that they must assume 20 – 60% increases in employer-provided health care premiums next year.  Additionally, the company plans to cut by 50%, its contributions to employee health savings accounts.  Furthermore, part-time employees will no longer have access to health care benefits at all.
A Wal-Mart manager who was interviewed for the report said that her wages of just over $9 per hour would not permit her to participate in the health plan, because her earnings just allowed her to get by now.  She thought she’d just have to do without health insurance, relying on public emergency room services, instead.
Analyst Larry Levitt of the Kaiser Family Foundation, who was also interviewed, predicted that health care costs are likely to rise about 5.5% next year.
So, do the math.  Wal-Mart will reduce the benefits to its workers and enrich its bottom line by anywhere from 15% to 55%, or more, depending on whether or not the workers continue with the company insurance plans.
So, who wins, given this scenario?  Surely not the 99%!
Wal-Mart’s shareholders, including seven members of the Walton Family who are on the Forbes list of billionaires (March 10, 2010), plan to further enrich themselves by creating the conditions that force their workers to rely on publically-supplied health services.   The public is us, the 99%, of course.  We have laws that those who visit emergency rooms must be given service.  That service must be paid for by those who have health insurance or pay taxes that support publically-supported hospitals.
On or about the same day that this news was broadcast by CBS, the San Diego U-T contained a full-page advertisement touting the tax dollars generated by Wal-Mart stores in the area.   There was no mention of the costs those stores were about to impose on the community because of Wal-Mart’s decision to make health care benefits so expensive that their employees would have to use public rather than employer-provided private health care benefits.
As an industry leader, Wal-Mart might be setting a trend with its actions.  Will competitors like Target soon be following its lead?  And, what about other corporations in other industries?  Will they do the same to inflate their bottom lines?  Will we, the 99%, soon be paying higher insurance premiums and co-pays to cover increased emergency room service use by those whose employers no longer provide affordable health care plans?
The Wal-Mart case is just one example of why thousands of people, young and old, alike, have taken to the streets and other places to demand a more equitable economic system.  They see the corporate system as disrespectful of honest labor because rewards for their work are disproportionally directed to the bottom lines of the 1% at the top.  They also see the entire governmental system as agents of the 1%, since they donate most of their election campaign funds.
You are the 99%.  Are you ready to join in challenging the system to ensure that you, and others like you, get a fair deal from the 1%?
If you’re ready, but don’t want to gather in the public square, try using other tools of democracy.  Stop buying goods and services from corporations that don’t treat their workers fairly.  Support unions who will fight for their workers.  Demand that your elected officials create and enforce laws that ensure that corporations cannot rely on the public to pick up the costs for employee benefits they cut when they’re so profitable.  And, finally, demand that your elected officials work for you, instead of the corporations that fund their campaigns for reelection!  You, the 99%, have more votes than the 1%.  Use them to make your point.
The views in this editorial reflect the views of its author and do not necessarily reflect the views of East County Magazine. If you wish to submit an editorial for consideration, contact editor@eastcountymagazine.org