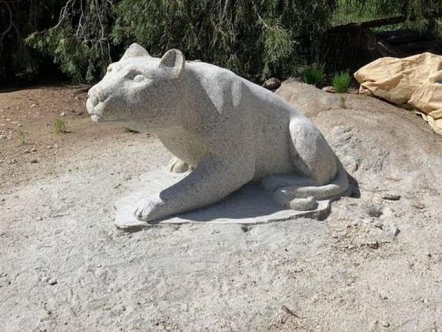 Photo:  Duncan McFetridge is a climate activist and artist.  He carved this sculpture to honor the mountain lion, a keystone species in the Cleveland National Forest ecosystem.  The Alpine Plan is a threat to the lion, symbol of the forest, under consideration for threatened species status in Southern California.”

April 28, 2021 (Alpine) -- With a new and improved Board of Supervisors now at the helm of our county government, San Diegans finally have hope that we may make progress on the housing and environmental crisis gripping our region. San Diego County continues to fall far short of its state-mandated housing production goals, especially when it comes to affordable housing. Rents in the area are some of the most expensive in the country, and it takes eight to ten years for applicants to secure federal housing subsidies due to high demand and long waiting lists. It’s clear that San Diego County’s approach to affordable housing is failing.

The solution to make housing more affordable and our region more livable is clear: we need public transit, biking, and walking options that make it possible for San Diegans to access work, school, and services without climbing into their cars. Transit-friendly housing, which is built to a higher density, is more affordable by design than housing located far from jobs and services.

With respect to the environment, the new Board of Supervisors has a clear understanding of the degree to which San Diego County has failed to do its part to address our global climate crisis. Under the leadership of Board Chair Nathan Fletcher, our Supervisors appear poised to create a county Climate Action Plan (CAP) that will meet the state’s expectations for reducing San Diego’s contributions to greenhouse gas emissions. This commitment to improving our local response to climate change is both welcome and long overdue. But the CAP is not the whole picture.

For example, county staff are currently overseeing an update to the Alpine Community Plan. The rural community of Alpine is ensconced mostly within the Cleveland National Forest. The forest area, being environmentally sensitive and prone to wildfire, until recently was protected by the voter-approved Forest Conservation Initiative to preserve the forest. That initiative passed by an overwhelming majority in 1993 but became automatically amendable in 2013.

The county’s proposal in the updated community plan for Alpine would allow 18 times more housing on land within the forest boundaries than would have been allowed in the voter-approved forest initiative. It would also enable substantial density increases in other rural parts of Alpine. Encouraging housing development in these wilderness areas of high fire risk is out of step with California state guidelines, the priorities of most San Diego County voters, and the stated priorities of our new supervisors. For the county to deliberately plan for homes in the path of imminent fire danger seems almost willfully negligent.

County planning staff have also proposed to develop a resource-intensive public park in Alpine, one that is clearly designed to attract users from throughout the region instead of providing the types of amenities appropriate for this small community. At a moment when every planner should be focused on enhancing these types of public facilities closer to population centers, how does it make sense to create a “destination park” in the midst of some of our region’s most delicate habitat? 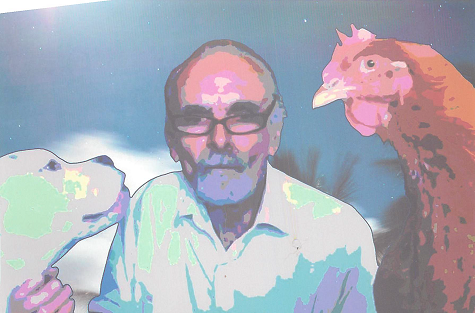 Photo, right:  Portrait of Duncan McFetridge with what he quips are “my political advisors.”

The county’s interpretation of a new state law aimed at reducing car traffic is yet another case in point. SB 743 requires cities and counties to change the way they approach transportation planning. Instead of focusing entirely on traffic congestion, environmental review of new projects must now evaluate Vehicle Miles Traveled (VMT). The old approach to congestion analysis led planners to focus on widening roads to accommodate more cars, which studies have shown ultimately lures even more vehicles onto the road.

Applying the newer VMT standard, by contrast, encourages jurisdictions to invest in public transit and make walking and biking feasible alternatives to driving. But the old Board of Supervisors decided to exempt the vast majority of future development from the new VMT standard. This approach would allow more of the county’s old bad habits to continue: building high-end homes far from city centers, doing little to address our housing affordability crisis and putting our climate future at risk. The new Board should fix that mistake.

This moment calls for a reckoning in San Diego’s approach to housing and transportation planning. The San Diego region can, and must, make getting around by transit, biking and walking competitive with the automobile in priority areas, like the 40 square miles bounded by the Trolley Ring in the City of San Diego’s central core. Definitive studies have shown that this high-density zoned area, which includes downtown, could successfully achieve a 50 percent mode share of transit, bike and walk and become a model for walkable, bikeable neighborhoods. The results of the recent election prove that San Diegans are ready for this kind of change. It is time for our local policymakers to commit to ensuring a more livable future for all of us.

Duncan McFetridge is co-founder and director of the Cleveland National Forest Foundation, an organization dedicated to sustainable land use planning and the protection of vital natural resources.

Mr. McFetridge of Descanso lectures that dense development should be located near services, yet he sued Albertsons to stop a national supermarket-drugstore chain from bringing high quality services into Alpine even though that use is exactly what the community plan allowed. His claims were so farfetched the Court ruled against him and noted "no oral argument was required." In other words, the judge ruled Mr. McFetridge should not waste the Court's time presenting what the Court knew would be a dubious argument. Maybe Mr. McFetridge ought to move to a dense development near services instead of enjoying the great outdoors of Descanso.