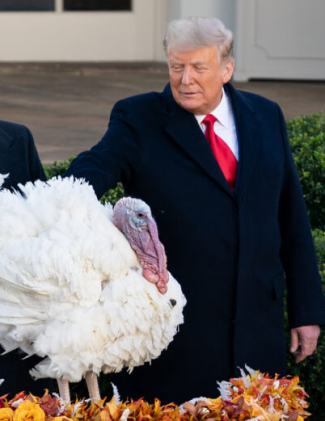 Photo via the White House

November 25, 2020 (Washington D.C.) -- Well, it’s that time of year, “I beg your pardon.” Just not sure which turkey should be pardoning which. Of course, Trump will try to pardon both the Feathered One AND the self-anointed “Chosen One,” if he can. There is no consensus among constitutional experts as to whether Trump could actually pardon himself, so don’t be surprised if he does. After all, the question would obviously be decided by a trumped up Supreme Court, so what would he have to lose?

Trump may well need a pardon at some point with the number of investigations into possible criminal and civil wrongdoing in his personal and business activities. He may be facing federal and state charges once he leaves office, unless he simultaneously leaves the country, a possibility at which he hinted during his re-election campaign.

Biden is lukewarm toward having the Department of Justice (FBI) investigate Trump’s possible misdeeds, because he thinks that would distract from his efforts to reunite the country. Constitutional experts, however, believe justice trumps everything else when it comes to protecting the sanctity of law and order in a civil society. In other words, no one is above the law. Accountability applies to every person. To do less would send the wrong message, further harm our judicial system, and undermine the struggle for social and racial justice reform.

Regardless of what Biden does, the attorney general of New York and the district attorney are free to pursue their own investigations. They are particularly investigating tax evasion possibilities and other alleged illegal activities within Trump Enterprises, whose lawyers have consistently sought delays and made time-consuming requests, all in the hope of staying out of court.

Trump has talked a lot about fraud, and that’s one of the possibilities being investigated. However, this time he’s the one being investigated for fraud by the New York District Attorney, in the case involving two women who were paid hush money before the 2016 election.

The New York State Attorney General is investigating possible fraud committed on loan applications to get better rates and minimize tax liabilities by misrepresenting the true value of certain assets. If Trump is charged, convicted, and sentenced, he could be incarcerated. He wanted a second term, but I’m sure this is not what he  had in mind.

Dr. Juan Andrade, Jr. is co-founder of the U.S. Hispanic Leadership Institute. He has helped promote democracy in 10 Central and South American nations during the George H.W. Bush administration. He has earned five degrees and was named among the 100 most influential Hispanics in America five times.