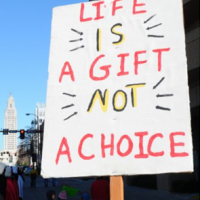 February 16, 2020 (San Diego’s East County) -- This year marks the Roe v Wade Supreme Court decision 47th anniversary. While mourning the deaths of over 61 million babies, it is also time to reflect on the direction of the pro-choice movement. For years those who defended a woman’s right to abort her baby were thought to be merely confused or misinformed.

Although, some disturbing incidents occurred in front of abortion clinics between pro-lifers and those against. Pro-choice young punks kicking a little old lady as she knelt in prayer. Or spewing the vilest language at pro-life teen girls as well as spitting in their faces. Pro-choice activists cheering a plane banner that proclaimed late term abortionist, George Tiller, a “national treasure!" These incidents were believed to be from extreme fringe elements but not representative of most of the pro-choice supporters.

They professed to want abortion to be “safe, legal, and rare”.This is a far cry from today’s pro-choice movement as whole and their shocking turn to abortion at any time, for any reason, and at taxpayers’ expense. It has become a proud celebration of abortion as a good thing! As pro-lifers have made advances in favor of life, pro-abortion forces continue this dangerous trend.

First, 9 states and Washington D.C. have passed late term abortion legislation. This includes 7 that have no limits allowing abortion up to up to the moment of birth. Only 6 other countries allow abortion after 20 weeks, including North Korea and China. The extremists New York legislators cheered when the bill passed while Governor Cuomo had the Freedom Tower lit up in pink to complete the celebration.

Secondly, the pro-choice movement lead by many extremists in entertainment joined the viral social movement #ShoutYourAbortion. They work “to normalize abortion through art, media, and community events all over the country.”

Women are encouraged to “shout their abortions” by sharing their personal stories. The idea is promoted that abortion is not only necessary but a social good. The latest example is the award-winning actress and reportedly pregnant, Michelle Williams, who proudly proclaimed it in her acceptance speech. She said, “I wouldn’t have been able to do this without employing a woman’s right to choose.”

Lastly, probably the most offensive agenda push was expressed by Virginia’s Democrat Governor Ralph Northam. In an interview, he defended the bill regarding the abortion complication of a baby born alive. He chillingly stated, “the infant would be delivered. The infant would be kept comfortable. The infant would be resuscitated if that’s what the mother and family desired, and then a discussion would ensue between the physicians and the mother.”

In conclusion, we’ve learned the slippery slope is very real. Another truth is evident, “The heart is deceitful above all things, and desperately wicked:” Rejoicing and allowing profiting from abortion dismantles societal decency.

Mother Teresa wisely stated: “Any country that accepts abortion is not teaching its people to love, but to use any violence to get what they want. This is why the greatest destroyer of love is abortion.”