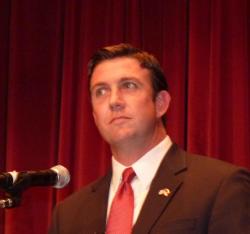 Oct. 18, 2013 (San Diego’s East County) -- I received the attached response to my letter asking my representative, Duncan Hunter,  to vote in favor of a resolution to keep the government open and prevent a default on the debt of the United States.

My representative’s response was that he had voted against the resolution stating that it “fails to address some of the most serious issues facing this nation.” So what are those serious issues?

From a BBC article of October 16, if the U.S. were to default on its debt,  “No one really knows exactly what would happen, but the likelihood is that markets around the world would plunge and global interest rates would rise … In the US, Goldman Sachs estimates that $175 billion would immediately be withdrawn from the US economy and it could lead to a very deep recession.”  (“What happens in a US debt default?”  http://www.bbc.co.uk/news/business-24453400). And interest rates are forced up. making it more expensive for the US to borrow money to maintain that $17 trillion debt that Rep. Hunter is so worried about.

But that is not one of the “serious issues” that concerns Rep. Hunter.

As for the current US economy, “Standard & Poor’s Ratings Services yesterday said the shutdown has shaved at least 0.6 percent off of fourth-quarter 2013 gross domestic product growth, or taken $24 billion out of the economy.” (“Shutdown Hit Boehner’s Favorite Diner as $24 Billion Lost” http://money.msn.com/investing/news.aspx?feed=BLOOM&date=20131017&id=17006518&ocid=ansmony11)

But that is not one of the “serious issues” that concerns Rep. Hunter.

And unemployment? The current shutdown has “added more than a half-point to this year’s unemployment rate, or the equivalent of about 900,000 jobs, (From the same article in the previous paragraph.)

But, again, that is not one of the “serious issues” that concerns Rep. Hunter.

I am certainly not suggesting that Rep. Hunter is so out of touch with reality to not understand the effects of our government’s inability to manage its finances. However, if he hasn’t lost his grip on reality then what is the explanation for his vote opposing a resolution that prevents the above listed hardships that have been and could have been brought on the people of the United States?

I would suggest it is his unwavering support of the Republican Party and its leadership. When the final vote was cast, Rep. Hunter knew there would be enough votes to pass the resolution and prevent a default so by voting against it he draws favor from his party but doesn’t have to stand up for his supposed belief that “we can no longer delay hard choices.”

So Rep. Hunter, when are you going to start making those hard choices? Cutting a bloated military budget and raising taxes on corporations and the wealthy to cover guaranteed entitlements and education. When are you going to tell your sacred Republican Party that every day they block a real budget it continues to weaken the US economy and damages the United States’ credit around the globe? It is certainly true that the budget is a political statement but playing politics with the budget has detrimental consequences. So Rep. Hunter, are you aware of the consequences?