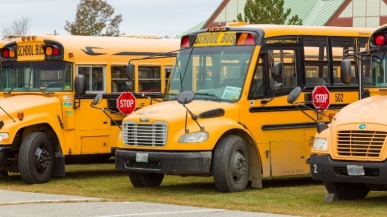 Parents work schedules and students after school activities have also been greatly affected. When morning stop times are made earlier and families are not notified, the potential for students standing at stops where buses have already been leaves those students very vulnerable to potential harm.

When discussion took place about having buses staged in Alpine for many reasons including possible need for evacuation at school sites, AUSD showed little or no concern in this area. Parents and children have been so upset over all of the unknowns and daily changes that almost all are either angry or worried every day. Early buses have also had an effect on students not getting to school at all in some cases. Late buses have caused students to miss breakfast or they are eating in the classroom.

On the afternoon of Friday April 13, 2018. GUHSD decided to add a 5th bus route. The new routes went into effect on Monday April 16th.  Route and time changes are still occurring daily. Elementary afternoon bus routes are no closer to working safely and effectively than they were one week ago, April 10th, 2018. How long will Alpine students, parents and school employees expect to endure while these issues continue to plague all that are impacted by these unnecessary changes?

Grossmont buses have also caused delays. Buses break down regardless of where buses are housed as is evident of the break-down of Grossmont bus during this last week.

We ask you to consider putting students FIRST.