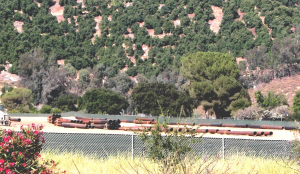 July 20, 2017 (Pauma Valley) -- Living in the peace and quiet of San Diego County rural lands has been a great joy since our retirement in 1997. It certainly is a different world from Point Loma. It is like being in heaven having 3-4 deer, within a flock of 20 wild turkeys, greet my wife, myself, our cat and dog in our yard.

In my first summer after high school, my introduction to our forest lands was with the Laguna Hotshots, fighting forest fires in the 1950's. We were re-introduced to fire in the 2003 and 2007 fires near our home.

Seeing the SDG&E steel poles, stacked in a field in Pauma Valley, caused me to reflect. Those wires are potentially dangerous and lethal; similar wires have caused ignition in other places including the 2007 firestorms.

It doesn't take much imagination to think of that SDG&E project as nothing but a huge  electric grill, ready to cook people to death, along with homes, trees and animals.

We're aware that larger voltage fire-starting lines are coming, due to some SDG&E improper paperwork that Judge Timothy Taylor corrected. SDG&E sought to expand an easement on my own property and take my land without compensation, but was denied by the court.

So now those larger lines also cross the Denver Fox County Outdoor School, which is next door to us. These high voltage lines also are in the San Luis Rey River bed, near a playground, that is part of the federal government water settlement with five Indian tribes.

his SDG&E project is part of eight years of litigation as they pushed their way through state and federal park lands.  I've been told that in the area around Alpine and its school, plus others, SDG&E responsibly undergrounded the lines to minimize fire risks and visual blight.

Firefighting also taught me the effect of Santa Ana winds. They come from the east, and can easily double and triple in strength as they are squeezed through our canyon. They also blow embers over the entire area of 3,000,000 residents' homes in San Diego County, clear to the coast!

It would seem the authorities of SDG&E may have overlooked this unique canyon area, the children who play here, and the "blow-torch" effect of Santa Ana's. Could your readers let SDG&E/Sempra Energy know that putting the line underground in the adjacent Highway 76, just as AT&T has already done, would be a win-win -win for everyone?  That would certainly would be appreciated by all. It would also meet with the zoning as a State-designated Scenic Highway.