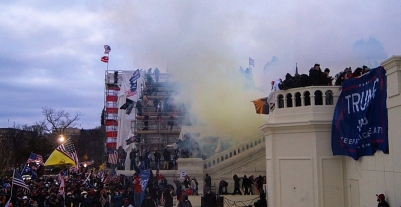 February 10, 2021 (San Diego) -- Donald Trump must be convicted and disqualified from running for office ever again.

The House impeached Trump for his incitement of an armed insurrection against the U.S. government to throw out the results of the presidential election. Now, it’s time for the Senate to act.

If he’s convicted in the Senate, Trump can be forever barred from holding public office again.

The Senate must hold Donald Trump accountable for his attack on our democracy and the rule of law.

Our democracy must emerge stronger from this crisis. 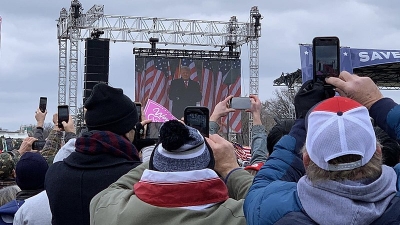 Photo, right: “Stop the steal” rally held by Donald Trump on Jan. 6, 2021, where he urged supporters to march to the capitol and “fight.”

Emily Sapp is a student in San Diego.

And just like that, the second impeachment sham fizzles away like a fart in the wind. The Democrats had their chance to call witnesses, why did they cave so quickly then? The answer is simple, it was a tactical error. They were expecting all of the Republicans to vote against it which would give them the moral high ground. Their bluff was called and they folded like a cheap suitcase, because they had nothing for witnesses and were scared to death of who the Republicans might call. As Rush Limbaugh said "It's symbolism over substance."
No matter what the House managers put out there the retrumplicans will NEVER vote to convict. trump will get off scott free and run again in 2024! It is too bad!
I've seen some gaslighting on this site, but this ridiculous. Lets start with this whopper "“Stop the steal” rally held by Donald Trump on Jan. 6, 2021, where he urged supporters to march to the capitol and “fight.”" Now lets have a look at what he actually said "Peacefully and Patriotically" If you're going to quote someone, you shouldn't be allowed to pick and choose which words and phrases to include in your quote, it makes you look dishonest and disingenuous. For the record, I don't agree with Trump's decision to hold a rally that day, I think it was a poor choice. However, calling what took place an "insurrection" is pure gaslighting. There is much evidence that what took place was planned in advance, most likely by members of BLM, Antifa, or even the DNC. Several individuals videoed inside the Capitol where known operatives of these groups dressed up as Trump supporters yet we don't hear about that from you.

It is true that at one point Trump said "peacefuly and patriotically" but given that there were gun-toting folks in the crowd and he urged them to fight like hell, and had encouraged previously the Proud Boys to "stand by" and had repeated false claims of alleged election theft and encouraged fighting to stop the lawful certification of the electoin, it appears to many that he meant to foment violence.

There's more than his words at the rally that morning.  He gleefully watched on TV as the insurretionists broke into and looted the Capitol, some chanting "death to Mike Pence" which I saw on television live and he certainly would have,too. He refused to take calls from Pence while this was going on. He never ordered the National Guard in when it was requested. Pence finally authorized it, hours later.  The president did nothing to stop the violence; only after a coupleof horus of the mayhem did he issue a statement telling rioters to go home, and even they he said he loved them and urged them to remember this day.  It's seditious for a president to sit idly by while the Capitol is being ransacked and lives of the VP and Congressional members threatened.

Really? Never heard of John Sullivan? Whatever happened to investigative journalism? Apparently it got buried with unbiased reporting. John Sullivan, who uses BLM and Antifa hashtags. Sullivan was at the doors inside the Capitol near Ashli Babbitt when she was shot. To reiterate, I don't support what went on in the Capitol that day and I agree that everyone who illegally entered the building should be rightfully prosecuted, including Mr. Sullivan. However, I do support the protestors who were there peacefully, which makes up about 99.9% of those who attended. Lumping Conservatives in with those who broke the law that day would be no different than associating every Democrat with the gangs of thugs who've burned and looted our cites for the past 4 years in places like Portland, Seattle, or own La Mesa etc.

And if you watched the full videos shown at the impeachment trial today (not the censored Fox News version) you would see that the overwhelming majority of those inside the capitol were terribly violent, many of them chanting to kll Mike Pence, many of them engaged in  violent,illegal and dangerous actions. The guy in Pelosi's office had a stun gun, it's now confirmed per the FBI. Some had guns, zip ties, and other weapons.  The crowd acted like a mob, destroying property, hurling objects at police officers, etc. Did you know that 140 police officers in the capitol suffered injuries, many of them serious? One lost an eye, quite a few were hospitalized, and one officer was murdered.  Virtually none of those who went inside the capitol were peaceful.

That is different from ones who stayed outside, exercising their lawful right to protest.

Based on my previously stated position on the matter, it seems as though we're in rare agreement.