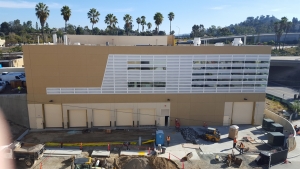 May 24, 2017 (San Diego's East County) – Late last year, the Grossmont Healthcare District (GHD) and Sharp HealthCare celebrated a new Central Energy Plant that we completed in partnership at Grossmont Hospital. I’m proud to say that we were named a finalist for this year’s Golden Watchdog Awards in the public-private partnership category, presented by the San Diego County Taxpayers Association.

Construction of the over $50 million Central Energy Plant (CEP) was financed through Proposition G, a bond measure sponsored by GHD and approved by East County voters in June 2006 with over 77 percent of the vote. In addition to the taxpayer-funded part of the project, we also completed a $14.6 million cogeneration unit which replaces outdated technology.

By partnering with Sharp Grossmont Hospital on the cogeneration unit, GHD was able to obtain favorable municipal financing, with Sharp agreeing to pay all debt payments over a 9.5-year term, thus providing the new public asset at no cost to taxpayers. The new unit now provides up to 100 percent of Grossmont Hospital's required electricity through on-site generation, without being solely reliant on the power grid. It not only provides energy savings, but also reduces the hospital’s greenhouse gas emissions by 90 percent.

Serving as landlord to Grossmont Hospital on behalf of our taxpayers, it is important for us to work together to ensure that operations are as efficient as possible. The other finalist in the public-private partnership category is a tough opponent, the City of San Diego and the San Diego Padres, but we have something in common. Just like the Padres are the only baseball team in town, we’re currently the only hospital in the East County district, serving approximately 500,000 residents and counting.

The CEP is among a series of significant facility improvements underway at Sharp Grossmont Hospital that not only produce cost-savings for taxpayers, but also ensure the hospital’s capacity to provide the highest quality patient care services for many years into the future.

As is often the case with state-of-the-art hospital improvement projects, all the complexities simply can't be addressed in the news. To help answer additional questions about the new CEP, here are some frequently asked questions: bit.ly/2ri91e5.