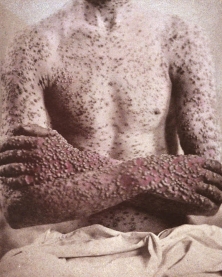 As COVID-19 quarantines cause disruptions worldwide, a survivor of a prior pandemic speaks out

Photo: A case of smallpox in 1886; public domain image via Wikipedia

June 10, 2020 (San Diego’s East County) -- It fell off me in the shower this morning.  I felt the brief pinch and saw it before it went down the drain.  The little piece of thin  plastic suture used to hold together a former pustule on my skin, hiding it. It has been more than a decade since I saw the last of its kind.  This may, finally, be the last of them all.

As a preschooler, I followed my late father to a research station in New Mexico along the border.  My father was an experimental psychologist who was trying to measure learning in bats.  It was a great adventure, until I caught one of the last cases of Smallpox in North America.

Kept in hospital quarantine and given painful baths by nurses wearing rubber gloves and face masks, I was "social distancing" a lifetime before I ever heard the phrase. The period had its effects.  When I reached kindergarten my teacher wondered why masks covered the faces of the people I drew.  While other teenagers popped their zits, I removed plastic surgery sutures.

So, be patient, bad things do heal, eventually.

Editor’s note: The last naturally occurring case was diagnosed in October 1977 in Somalia. The World Health Organization (WHO) certified the global eradication of the disease in 1980, thanks to the most successful global vaccination campaign in history. The disease killed 30 percent of those who contracted it and left many survivors disfigured for life and/or blind. Today, the smallpox virus survivors only in laboratory test tubes; an ethical debate continues on whether those should be retained for use in case of bioterrorism or destroyed.

Thanks for sharing. Unfortunately, antivaccinationists and those against the lockdown, face masks and physical distancing, haven't directly experienced what infectious diseases can do. No one sees polio today (though as long as it exists anywhere in world, could return); but there werea kid in my elementary school with a steel brace on one leg, I've known people in wheelchairs, and even met a man in late 1980s who had been in iron lung since early 1950s. In addition, I've known people who died from flu, not necessarily old. But more so, I've spent a life-time reading histories and current status of vaccine-preventable diseases. Antivaccinationists exaggerate severe adverse reactions which are rare; but real; but NEVER balance them in benefits/cost ratio. Yep, oral polio vaccine actually caused 3 or 4 cases per million vaccinated; but without, we would have had 10 - 20,000 cases of paralyses and, even one or more of the vaccine-caused cases, because of a possible genetic predisposition would have become paralyzed from the wild-type virus. And, despite what they choose to believe, overwhelming evidence, studies done in diffeerent nations with different cultures, histories, political, educational systems have carried out studies that have found NO association between vaccines and autism. No one in their right mind could believe that all of these researchers in different nations, medical doctors, epidemiologists, etc. could be willing to risk their own nation's children.

And I have studied pandemics of the past. We are still learning about SARS-CoV-2, Covid-19. If we let up too soon on safety measures, it could flare up with a vengeance. The 1918-19 flu pandemic came in three waves, the first like any flu, a few deaths, a few hospitalized; but most just an unpleasant week; but then the second wave was deadly. With a population less than half of our current population it killed upwards of 700,000 people. Maybe COVID-19 won't flare up; but I value life and health, so I prefer to err on the side of caution.

And, as I've written elsewhere, if this nation didn't waste so much unnecessary money on the military, our overmilitarized police forces and even for-profit prison systems, we could weather the lockdown with the resources to help each other. I'm all for a strong defense; but our military has been killing and crippling people in developing nations, not because they are a threat to us; but to further corporate profits, e.g., oil, coppar and/or corporations that make weapons. Though this then, by killing innocents, creates groups like the Khmer Rouge and ISIS. And I am for police protecting us against predatory felons and imprisoning them; but not a police force that acts as if almost everyone is dangerous, especially blacks. A SWAT team in another state broke down the door of an elderly woman who hadn't paid some traffic fines. This is insane.

So, I'm glad you survived smallpox and, hopefully, have had a good life and I thank you for letting people know that vaccine-preventable diseases can be absolutely horrible.

perspective in this discussion.

Thank you, Miriam for letting me tell my story.

More than 1,200 have already clicked open to read your story of surviving smallpox and we didn't even add it into the weekly newsletter yet!