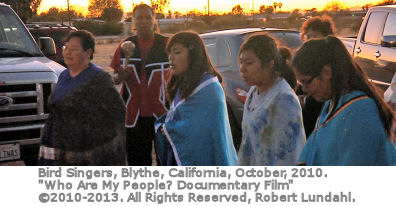 March 10, 2013 (Solana Beach) — Chris Clarke's recent article deconstructs a video clip from the film, "Who Are My People?" http://www.kcet.org/news/rewire/solar/filmmaker-blm-lax-on-native-consultation-over-solar-projects.html It is important for the public (us) to get our heads around the idea that the federal government is legally responsible to Native people.

In this case to uphold processes involving consultation when construction projects impact historic grounds, where there was a village, burials, where there is an area historically, or in the present day used by Native peoples, in spiritual or traditional practices.

And my point, since the beginning in July 2010 is they have not, and do not, properly consult with Native peoples "on a government to government basis" as is required by law. At that time I wrote "Good Energy Gone Bad" for Solar Times, page 8, documenting irregularities.

And the federal government, which made that law, is breaking that law. In the film, "Who Are My People? The evidence is "on file," in the BLM's (Bureau of Land Management/Department of the Interior) own words below.

What that means IMHO, is that all of the solar and wind projects across the Mojave and Colorado deserts, whose permitting depends upon such processes to provide balance and scope to public decisions of significant heft, related to our energy future, and the development of what we call renewable energy, are illegal.

They are illegal on their face, because the federal government's program and policy of consultation with Native peoples is (as is required by the National Historic Places Act of 1966, specifically Section 106, thereof) a shambles, can be played for a "scam" and used by developers and agencies to justify bad projects, like Ivanpah and Rio Mesa, Ocotillo and Blythe Solar, and Genesis (Florida Power and Light, aka Next Era, aka, Genesis LLC, aka Genesis), built on the bones of ancient cremations.

So when you think ethnic cleansing is something related to Bosnia, or destruction of world heritage confined to the "Taliban Buddhas," think again. It's happening down the road from Pasadena where I was raised, in the desert, where we vacationed, in America, 2013, targeting people, and a people, and peoples, to whom this has been done before over and over again, where you live and do business.

And this video is the "smoking gun," the revealing truth, the "dolphin in the tuna net."

Robert Lundahl is the film maker of the documentary "Who Are My People?" http://whoaremypeople.com. He may be reached at robert@studio-rla.com

As long as Holder is running the Justice Department do not count on them helping you out. Their goal is to support the Obama socialist agenda and "green" power above all. Sort of like when the Supreme Court ordered President Jackson to quit moving the Cherokee Indians off their lands. His comment was something like,,if they dont like it, tough.