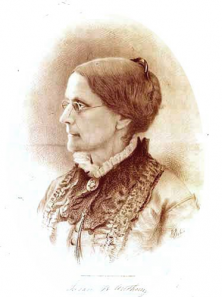 February 15, 2020 (San Diego) – Today is the 200th birthday of Susan B. Anthony, who fought tirelessly to win the constitutional right for women to vote- a victory finally attained 100 years ago. She also fought for equal rights for women – a battle that two centuries later, has still not been won.

Alarmingly, as we see an erosion of protections for women across the nation in everything from equal pay to violence against women to reproductive health, we have men running for Congress here in California's 50th  Congressional district whose voting records indicate that they are dangerous for women.

Two of them, Brian Jones and Darrell Issa, have long legislative records of voting against freedoms for women and touting policies that belong in the Stone Age, not the modern era. A third Republican, Carl DeMaio, is less extreme but still opposes full equality in pay and health services access. (Mercifully, there are other choices in this race, including at least two candidates who support equal rights for women.)

Let’s take a closer look at the chauvinistic records of those would-be Congressmen who seek to oppress women out of religious zealotry or political extremism:

According to Votesmart.org, as a state legislator, Jones filled out a survey identifying himself as pro-life. In that that survey, he indicated he believes abortion should never be legal, even if a woman’s life is endangered. I can understand concerns for the unborn. But what’s “pro life” about condemning a woman to death?  Or choosing who should live and who should die?  Shouldn't a woman and her family make that  heart-wrenching choice?  A Christian fundamentalist, Jones also opposes abortion for women who are raped and for children who are victims of incest.  Young girls who are victims of these brutal crimes are often too small to give birth without C-sections, being cut open in major abdominal surgery because men like Jones care nothing for their lives or the trauma imposed.

Despite opposing all abortions, even a morning-after pill in the first days after conception, Jones also voted against a program to offer financial help to pregnant teens and against authorizing registered nurses to dispense contraceptives to prevent unwanted pregnancies.  He got a 0% rating from Planning Parenthood on reproductive health issues, including access to birth control.

He also voted against pregnancy or childbirth leave for employees, against paid maternity leave for teachers, against accommodations for nursing mothers in the workplace, and against positions held by the National Organization for Women the vast majority of the time.

As Congressman in the 49th Congressional district before running in the 50th (where he doesn’t live), Issa voted against the Lily Ledbetter Fair Pay act to assure women could earn the same pay as men for equal work. Issa also voiced opposition to the Equality Act during this week’s candidate forum and he, too, backs allowing religious zealots to discriminate against women among others.

He also voted against family planning funds in foreign aid, had a mixed record on the Violence Against Women Act (voting both for and against it in various years), voted against renewing the Children’s Healthcare Act, supported privatizing Social Security, and voted to eliminate all federal funding for Planned Parenthood even for mammograms and other women’s cancer screenings.

Issa voted “pro-life” meaning anti-abortion nearly 100% of the time, including voting to make it a crime to take a minor to another state for an abortion, if abortion is illegal in the state where the minor lives. (Sources: VoteSmart and On The Issues).

The conservative talk-radio show host has positioned himself as less extreme than Issa and Jones on abortion, in the past calling Roe v. Wade “settled law.”  But he now favors restrictions on access to not only abortion, but birth control and women’s cancer screenings. At a candidate forum, last fall, he stated, “Anyone who wants to...suggest that Planned Parenthood is a legitimate women’s healthcare outfit is either a fool or thinks you’re a fool...I sure as hell am not going to vote to fund Planned Parenthood.”

At a more recent candidate forum held Feb. 14, DeMaio, who is gay, took the hypocritical stance of opposing the Equality Act and supporting an alternative bill that would allow discrimination based on gender or gender identity, leaving equal rights in the workplace, housing and more up to the whims of an employer or landlord’s religious views.  We don’t allow such discrimination based on race or religion, so why condone discrimination against women or anybody else?

Thankfully, for voters who value women’s rights, health and lives, we do have better choices. Of the nine candidates in this race, two have been outspoken in support of women’s rights.

He has pledged to support:

The only woman in the race, independent Helen Horvath laments on her website that the only right women are guaranteed is the right to vote. She notes that 100 years after the Equal Rights Amendment was first introduced to provide equality for women, it still has not passed.

“The male dominated power structure in our society—those who have been in power in the 50th district and [the] other former Congressional representative currently in the district’s primary have used religion to attempt to take women’s rights away,” she said, criticizing legislation that “attacks a woman’s dignity and personal rights.”

Horvath is a fiscal conservative but staunchly pro-choice. She supports passage of the Equal Rights Amendment, now that a new ERA is being introduced in Congress.

With women’s rights under assault in many states and Congress, and the Supreme Court just one vote away from overturning Roe v.Wade, Horvath concludes, “The reality is that women’s rights can be taken away until the ERA and related legislation is passed in to law.”

The words of Susan B. Anthony have never been truer than today: “There never will be complete equality until women themselves help to make laws and elect lawmakers.”