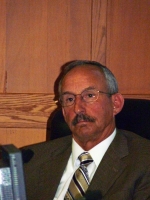 April 23, 2011 (La Mesa)--On Wednesday April 20th, the Helix Water Board on a 4-1 vote approved the two year MOU negotiated by the employees for the employees with no rate payer representation. That’s right! Mark Weston and Lisa Irvine, employees of Helix Water were appointed by the Board to represent the ratepayers’ interest in the negotiations with the employees.

Ok, what did I miss? General Manager Weston ($200,000+ salary) and Administrative Services Director Lisa Irvine negotiated against themselves on our behalf. That is like the NFL owners sending in the NFL Players Association to negotiate against the NFL players. Who were the brilliant Board members who came up with this idea (again)?

Yes, this is at least the third MOU in a row (over 12 years) the Helix Water rate payers have had no independent party represent them in negotiations with the non-union employee association. An employee association that still enjoys 100% of its members’ medical, dental, vision, and life insurance paid for 100% by the rate payers. In addition, the employees’ dependents health coverage is also covered 100% by ratepayers while active and in retirement and each employee gets a minimum of 192 hours of paid time off each year and 12 paid holiday days.

This year with all the publicity of pension reform including second tiers and the desperate situation most cities find themselves in financially, the HWD is in great shape financially because there is no ability for the ratepayers to vote no against rate hikes like taxpayers have--rate hikes that not only go to improve our water infrastructure and pay for increasing water costs but also go to pay for the most generous employee salaries ($76,000 average salary) and benefit package found in any public agency.

Board President Verbeke pontificated about how wonderful the employees are and the quality of service they provide, which has nothing to do with the benefit package they receive. Employees are paid a salary and in this case a very good salary to do the best they can in their job which is the same for any employer’s expectations of its employees. The 8% employee share of the pension paid by the HWD for many years is an employee’s share that should be paid in full by the employees--an amount that is not a pay cut if they were forced to pay it, but an investment in their own retirement.

The rate payers already pay 11.4% (this year) for the employee salary in pension costs and another 6.3% for them into the social security system before the additional 6% they will pay in FYE 2012. Yes, the employees are paying 2% this next year towards the full 8% but don’t worry, the Board also approved the greater of 2% or the CPI as a cost of living wage increase so the employees are not out any money.

The Board (except Kathleen Hedberg) made excuses why they didn’t get more for the rate payers in this MOU, stating they wanted to see what Governor Brown was going to recommend even though two cities they service, La Mesa and Lemon Grove, both have required employees to pay the full 8% share. The Board also could not negotiate a second tier pension formula for new hires or a significant change in employee pension and benefit costs for new hires. This is what we get from not having independent representation.

Board Members Smith, Linden, Muse and Verbeke are part of a good old boys (and girls) network and it is time to vote them out in their next election or we, the rate payers get what we deserve.