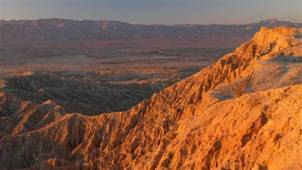 The Ocotillo Wind Energy Facility project proposes 112 wind turbines along a five mile common boundary with Anza-Borrego Desert State Park near the village of Ocotillo. These monstrous towers will cast their long shadows on Anza-Borrego Desert State Park.  The towers, at over 400 feet tall, will literally stand within yards of the State Park boundary, desecrating not only the State Park, and nearby State Wilderness Areas, but also the newly designated 12,000-acre Piedras Grandes State Cultural Preserve with its sacred Native American sites. Hundreds of thousands of acres of surrounding lands will have their viewshed qualities destroyed.

It is shocking to find that impacts to California's largest state park have not even been considered in the development of this proposal.  No detailed analysis – not a single Key Observation Point was considered for visual impacts!  The BLM has yet to explain why they did not consider impacts to the largest State Park in the contiguous United States.  What of the newly designated Cultural Preserve at Piedras Grandes, just west of Ocotillo Wind Energy Facility?  What of the wildlife corridors?
The environmental impact statement claims the project has been adjusted to avoid the Critical Habitat of the Federally Endangered population of desert bighorn sheep on the western margin of the project.  This is not the case.  The U.S. Fish & Wildlife Service was forced to "undesignate" Critical Habitat on this project site for political purposes which are unsupported by science. Even the environmental impact statement maintains that the proposed project remains in what has been determined by bighorn sheep specialists to be Essential Habitat.
As recently as two weeks ago a group of 18 bighorn sheep were observed and photographed on-site in the southwest area of the proposed project.
Virtually nothing in the environmental impact statement addresses recent scientific studies regarding the noise impacts that wind turbines have on birds and bats.  The ambient noise created by wind turbines disrupts the communications of both migrating and nesting birds, as well as the more than one dozen species of bats documented in the surrounding park area.
Proposed View Toward Ocotillo from Red Hill in Anza-Borrego Desert State Park

ABF supports alternative energy projects that make sense, like locating alternative energy facilities in populated regions to generate energy where it is needed most - for example, rooftop solar facilities. This makes economic sense. Mega-industrial complexes in our desert, a hundred miles from the customers, do not.
Did you know it is estimated that 6% of all energy sent into a 500Kv power line such as the Sunrise Powerlink is lost in transmission? Up to 6% of energy is wasted just in transmission along power corridors from remote regions. This means that 6% of the 112 wind turbines now proposed for this project, will be wasted, their electrical generation lost on the trip to San Diego. Energy from seven wind turbines, built at several million dollars each, will be wasted---forever.

These wasted turbines will kill countless birds and bats in their lifetime, all for naught, and it will be said, "It is a cost of doing business."
ABF opposes the Ocotillo Wind Energy Facility which harms our wildlife, destroys one of our last great wilderness areas and lines the pockets of power companies which profit most when energy is transmitted over long distances, hundred miles from the power source to you.
We of the Anza-Borrego Foundation are partners with the Park. We fight to protect it. We speak out even when the professional staff and scientists of the State Park have been told to be silent on this and all other regional alternative energy project proposals.  Energy should be developed in the region where it will be consumed, not hundreds of miles away and then wastefully transported into the cities.
This project is an affront to our desert, our conservation values, and our pocketbook.
Please join ABF in making sure that this mega-industrial complex never exists in its proposed location.  We urge you, to remember your experiences here in the Park, the wildflowers, the sheep, the vast open spaces, the remote time away from the bustle of daily life. We ask you to help preserve and protect your Anza-Borrego Desert State Park, by signingan online petition and by voting in an online poll conducted by East County Magazine.
About Anza-Borrego Foundation
Founded in 1967, Anza-Borrego Foundation is a nonprofit educational organization, land conservancy, and the sole cooperating association of Anza-Borrego Desert State Park®. ABF’s mission is to protect and preserve the natural landscapes, wildlife habitat, and cultural heritage of Anza-Borrego Desert State Park® for the benefit and enjoyment of present and future generations. Anza-Borrego Foundation’s Institute provides classes to more than 3,000 adults and children each year, covering topics such as botany, astronomy, photography, paleontology, native cultures, desert wildlife, and more. Visit www.theabf.org to learn more.
The views in this editorial reflect the views of its author and do not necessarily reflect the views of East County Magazine. To submit an editorial for consideration, contact editor@eastcountymagazine.org.

This project with 112 wind turbines will not be the end, but a foot in the door for the addition of many more of these turbines. Take a look at every wind resource area, the new installations do not stop. Beside the fraud behind this project, what is also particularly disturbing in all of this, is the pillaging and plunder of public treasures by corporate interests. These types of projects are opening the doors for the invasion of public lands across America.
Remember these words..........The day is coming when oil, logging, and mining interests will also make their move for the resources held in our National Parks. Sadly, they will be successful because corruption is really our King in America. Sometimes it may look like a donkey and other times an elephant.

You're right, 112 turbine would be just the beginning. However, this project has been proposed--no, aggressively pushed!--on public (BLM) land by none other than the Federal government itself--more specifically, by the Obama administration. If implemented, the president's policies would sacrifice hundreds of thousands of acres nationwide to what by common consensus is a terribly inefficient and destructive (yet PC!) form of energy production.