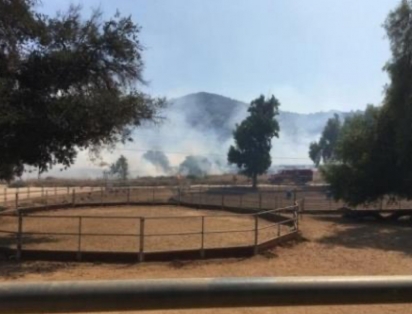 By Barry A. Treahy, Lakeside resident and retired firefighter

Emergency medical and fire protection has been in the news in California this year as it also was in the past.

I remember the Malibu fire that did destruction and burned almost to the ocean.  The term "fire storm" came out of one of these fires, perhaps the Malibu as I recall.

The house I built in El Monte Valley is a replacement for the one that the Cedar fire took.

This house was destroyed by negligence and failure to act.  The prior owner had hay stacked next to the house and when the "fire storm" came, embers got into that hay.

I mention this because as a retired firefighter, you have to use a little common sense and make sure you don't make a trap you catch yourself in.

I began building this house in 2010 and have been here since.

There have been no fires in our valley until this year.  Three issues trouble me.

l.  We were forced to pay a Cal Fire special "fee" aka tax for some sort of fire protection/inspection/prevention by them.  Many of you also.

I have asked our Representative government for the results of the use of our money and so far been ignored.

2.  I have asked for the "fire cause" determination to fire #3 of recent because in my travels, it smacked of a "suspicious fire."  May be perfectly innocent but I would like to know.

3.  Check out the valley:  all the "old" oak trees, ground cover, brush etc. destroyed, that identified in that Sand Mining EIR as protected.  No public outcry so far on that.

Yesterday, my neighbor across me on Willow called and said, "The sand miners are out here if you want to talk with them."

My suspicions come from arson whereby property owners have been known to burn their own property for fire insurance.  I have witnessed during my career where grass/brush fires erupted and shortly afterwards, construction began on the cleared out area.  Coincidence - right where those sand miners were.

Now I am not making accusations, but my curiosity was raised to see just what Lakeside Fire had for a cause.

After all, my medical and fire "first responder" is that agency.

After more than a month, I sent Diane Jacob the same request as a result of nothing coming my way.  She took the liberty to forward my request to the Lakeside Fire Protection District Chief, who delegated the response in person, to an employee of his, of three (3) weeks.

What came out of it - Diane Jacob our Supervisor, was not necessarily where it should go because Lakeside Protection District has a "Fire Board" of sorts.  I guess Ms. Jacob was also on the same page as myself - didn't know.

Things didn't seem to compute even though I went through the chain of command and ended up hearing that in addition; San Diego County Fire Authority, Cal Fires, Sheriffs were also intertwined in this mix.

At this point, I am frustrated because we pay taxes and Cal Fire Special Fees etc. for "service" and so far I am a dismal failure getting the cause of fire #3.

Me?  Neighbors of mine, this is "our" system and perhaps you have some thought about it, after all; you get the same service I would suspect; as well as smoke and fire it things get bad.