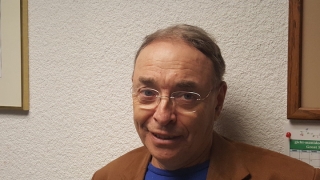 October 29, 2018 (San Diego) - We are now moving past “mere” voter suppression and voter intimidation. We have arrived at voter assassination.

It was almost exactly 80 years ago that the Nazis made their first serious move against their own citizens who happened to be Jewish. It was November 9 and 10, 1938.

The Sturmabteilung, that is, the paramilitary Brownshirts, sort of like the Proud Boys plus Robert Bowers plus Cesar Sayoc, ideological killers of Jews and other targets, pulled off the 1938 Kristallnacht, the attack on synagogues and Jewish businesses. They were far more prolific than Trump’s crew, destroying some 267 synagogues located in Sudetenland, Austria, and Germany. Estimates of murders of Jews were 91 at the time but that figure rose later, with more investigation.

Trump’s invective, identity attacks, slurs on his critics, and tolerance and even encouragement for physical violence against his opponents are one big permission slip to his more rabid supporters, Sayoc most obviously and Bowers (Tree of Life synagogue attacker) in all likelihood.

Cesar Sayoc’s van is plastered with pro-Trump posters and stickers, which is a more-or-less normal position of favor for a politician, but it’s his other signage, his hate posters for Hillary Clinton and Michael Moore and others—all with crosshairs over their faces—that really set him apart. The rage is palpable, visible, and sure enough, he acted on it, sending pipe bombs to that Jew, George Soros, and others.

Meanwhile, Trump equivocates, as usual, hinting with no respect for the truth that it’s all the fault of the media, and of Democrats. After the synagogue shooting he was even more outrageous, directly and insanely blaming reporters for the attack. That darn media keeps quoting him, reporting on his tweets, and playing actual recordings of the things he says. How biased! How uncivil! His handlers try to keep him on script and attempt to cage him into sounding momentarily presidential, but it’s buck naked obvious when he is reading someone else’s words—mostly because they are multisyllabic and sensible to a degree. When he’s off script again he’s wildly spouting hate and nonsense, back to his affinity for Alex Jones’ Infowars derangement.

Yes, deranged. That is uncivil but accurate. Who besides a seriously sick individual would claim that schoolchildren were not shot at Sandy Hook, and that the pipe bombs discovered addressed to Trump opponents are “fake”?

The only case for criticizing “the media” if we are interested in facts is to take much of what is coming out of Fox News with a block of salt. They routinely hint at the sort of disinformation that Trump more actively promulgates. While they are far more sophisticated than Alec Jones the thrust is pretty similar and, since they reach so many, actually much more dangerous to women, to Jews, to elected officials who prefer a social safety net, to Muslims, to patrons of nonviolent resistance, to Mexicans, Hondurans and Guatemalans in flight from horrific violence and so many others.

For many years many of us have been warning about the deadly potential for political violence when we have more than one gun for every American and political rhetoric in social media is unrestrained hatred and violent ideation. Now we see it.

Your vote for anyone who can help slow, stop, and reverse this decline in decency and erosion of democracy was never more important than right now.

Dr. Tom H. Hastings is PeaceVoice Director and on occasion an expert witness for the defense in court.