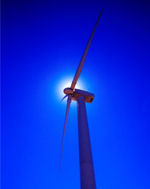 By Monique La Chappa, Chairwoman, Campo band of Mission Indians
March 17, 2012 (Campo)--Wind power is making a difference.  As a local source of clean energy, it reduces our dependence on foreign oil while also reducing greenhouse gas emissions. Wind power creates American jobs, and perhaps most important for the Campo Band, it is providing revenue and economic diversification so that members of our Tribe can have a better quality of life.

As American Indian people, we are caretakers of the earth. We have a responsibility to help protect the environment and our sacred cultural resources. I take pride in the Campo Band’s leadership in developing renewable energy on American tribal lands.

I write today to dispel some of the misinformation about wind energy, and the Shu’luuk Wind project in particular. Providing economic opportunities for our Tribe, and protecting Mother Earth, in fact can go hand in hand.
The co-existence of wind and wildlife
According to the U.S. Fish and Wildlife Service (USFWS), wind turbines account for little avian fatality compared to other societal factors such as buildings, highway traffic, and house cats. In fact, according to USFWS the highest cause of avian mortality is power poles, which is why we are putting all power lines underground.  Furthermore, the Audubon Society, the non-profit environmental organization that focuses on protecting birds and other wildlife, “strongly supports properly-sited wind power as a clean alternative energy source”.
Proper siting for wind projects, to avoid migratory paths, is important. Locally, there are no federally listed avian species within the wind farm footprints.  There are no eagle nests on the Campo Reservation and it was determined that the Reservation is not in a migratory bird corridor. In addition, the Shu’luuk project is subject to rigorous, independent analysis to ensure compliance with the National Environmental Policy Act (NEPA) and Campo tribal law.
This analysis requires comprehensive biological, environmental, and cultural reviews, and includes avian and bat studies.  The Shu’luuk project has been working with the appropriate state and federal agencies to ensure these resources are protected. The project Notice of Intent was published in the Federal Register in May 2011 and scoping meetings to gather public input were held in June 2011. The scoping report will be available soon, prior to the release of the NEPA Draft Environmental Impact statement, which will be released this summer for public review and comment.
Protecting public safety
With technological advances, modern turbines are better engineered and designed.  They are required to meet standardized safety and performance requirements, and the Campo Band will require diligent safety training for our workers.
For the Shu’luuk Wind project we are partnering with Invenergy, the nation’s largest independent wind power generation company.  Invenergy has an exemplary safety record and a proud track record of successful wind development across the country.
Public safety and fire protection also is a priority for our Tribe. Invenergy and the Campo Reservation Fire Protection District are working together to develop comprehensive fire and safety plans specifically for the Shu’luuk Wind project to protect our Reservation and nearby residents.  The Campo Reservation Fire Protection District is committed to safety and timeliness, and to educating the Campo Band and surrounding communities about fire prevention and safety issues.
No scientific evidence of negative health impacts from wind turbines
Numerous studies have found no evidence of adverse health effects from sound emitted by wind turbines. These include a 2009 study by a multidisciplinary panel comprised of medical doctors, audiologists, and acoustical professionals from the U.S., Canada, Denmark, and the United Kingdom. And just a few months ago, a Wind Turbine Health Impact Study by the Massachusetts Department of Environmental Protection in collaboration with the Massachusetts Department of Public Health,  found “there is no evidence for a set of health effects, from exposure to wind turbines that could be characterized as a ‘Wind Turbine Syndrome’” (www.mass.gov/dep/energy/wind/impactstudy.htm ).
Furthermore, the report found “insufficient evidence that the noise from wind turbines is directlycausing health problems or disease”.
Modern wind turbines – using aerodynamic design and sound-dampening buffer pads – operate quietly. Typically, two people can carry on a conversation at normal voice levels even while standing directly below a turbine.
Wind energy = economic development
Nationally, wind power has created 75,000 jobs, with a projected 500,000 industry jobs by 2030. In an age of job outsourcing, wind power is “insourcing” at a critical time.
Locally, Shu’luuk Wind will create 150 construction jobs.  When operational, the project will employ approximately a dozen full-time employees to operate and maintain the farm.  In addition, there will be indirect economic benefits for the greater community in the form of increased business at local retailers, restaurants, shops, and suppliers.
Shu’luuk Wind: transitioning to a stronger future
Overall, wind energy is one of the cleanest forms of electric power generation. Green energy is an economic development strategy for our Tribe, and an opportunity for environmental stewardship. As Shu’luuk Wind progresses through the environmental review process, let’s engage in a fact-based discussion about wind energy. Clearly, renewable energy is part of our collective future.
We look forward to doing our part in generating clean, local wind power in an efficient, cost effective, and environmentally-friendly manner.
Monique La Chappa is Chairwoman of the Campo Band of Mission Indians of the Kumeyaay Nation.  The views expressed n this editorial reflect the views of the author and do not necessarily reflect the views of East County Magazine. To submit an editorial for consideration, please contact editor@eastcountymagazine.org.

The Campo Indians are such hyporites if they go through with their giant windmill project. They claim to be for protecting the environment? Please, 50 story concrete industrial parks with spinning red flashing wheels on top of mountains. No one could be stupid enough to fall for this.

There are new technologies being developed all the time that are "bird proof", take up less space, more efficient and much more sturdy than the old style windmill.

In fact there is a turbine wind energy device that looks like a jet engine that you see on the side of an air plane. It can't hurt wildlife but can stand up to 150+ mph winds. It can also adjust to wind direction. The efficiency of the turbine is a minimum of 65% wind to energy which pardon the expression "blows away" the old style wind turbine. Not only that but you can put 6 of them on one post. Each turbine is capable of producing up to 1MW of power.

Renewable energy production is undoubtably the way of the future, these systems, even the old windmills, do far less damage to the earth and it's inhabitants then spilling oil all over the place or releasing radioactivity into the environment. Just trying to keep it real here! :)

I too once believed wind power was the solution to global warming and climate change. That’s before I learned that it was just a scheme put forward by Enron in the late 1990s to swindle the ratepayers of billions. Enron’s plan was to use renewable energy to green wash its plan to build more gas fired power plants throughout California. Rob Bradley who was a known whistleblower Enron worked there for sixteen years, almost as long as Ken Lay himself; from September 1985 to the mass layoff of December 3, 2001. His expose is at http://www.politicalcapitalism.org/enron/

Enron knew what most politicians and bureaucrats are unable to understand that most forms of renewable energy (except for hydro power) are intermittent and unreliable during periods of peak demand. Even hydro is unreliable during a drought. Solar has the highest capacity factor during peak demand when people are operating air conditioners, while wind power has the lowest capacity factor during peak demand because its highest production occurs in the early morning, late evening, and the middle of the night. This means increased emissions will be incurred by new wind projects in the form of more reliable gas turbine power during periods of peak demand; and therein lays the premise behind Enron’s swindle. Industrial wind technology is a meretricious commodity, attractive in a superficial way but without real value—seemingly plausible, even significant but actually false and nugatory.

Those who would profit from it either economically or ideologically are engaged in wholesale deception. For in contrast to their alluring but empty promises of closed coal plants and reduced carbon emissions are this reality: Wind energy is impotent while its environmental footprint is massive and malignant.

A wind project with a rated capacity of 100 MW, for example, with 40 skyscraper-sized turbines, would likely produce an annual average of only 27 MW, an imperceptible fraction of energy for most grid systems. More than 60% of the time, it would produce less than 27 MW, and at peak demand times, often produce nothing. It would rarely achieve its rated capacity, producing most at times of least demand. Whatever it generated would be continuously skittering, intensifying, magnifying the destabilizing effects of demand fluctuations, for wind volatility is virtually indistinguishable from the phenomenon of people whimsically turning their appliances off and on.

Moreover, the project could never produce capacity value—specified amounts of energy on demand, something that should be anathema to regulatory agencies, with their task of ensuring reliable, secure, affordable electricity. The ability of machines to perform as expected on demand is the basis of modernity, underlying contemporary systems of economic growth, wealth creation and well-being.

For the truth about wind farms, please see: http://www.city-journal.org/2012/22_1_environmentalism.html

And please remember that by far the worst thing about wind farms is also the one thing that neither Ms. La Chappa nor anyone else can even pretend to deny: their hideous disfigurement of our beautiful wilderness areas.