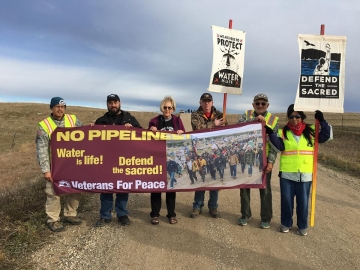 December 8, 2016 (Cannonball, North Dakota) -- Over the past eight months, the Standing Rock Sioux Tribe of North Dakota have been joined by more than 200 allied tribes and tens of thousands of non-Native activists for a nonviolent resistance campaign against Energy Transfer Partners’ (ETP) $3.8 billion Dakota Access Pipeline (DAPL). The pipeline, which has been projected to transport at least 470,000 barrels of oil per day over 1,100 miles from the Bakken oil field to an existing hub in Illinois for delivery to refineries on the Gulf Coast, was rerouted in 2014 from north of Bismarck to the south, taking it through unceded treaty lands of the Sioux. Pipeline construction over this altered route desecrated sacred ancestral sites, and, until last Sunday, was slated to cross the Missouri River at the Lake Oahe reservoir, which would have threatened the safety of the drinking water of the Standing Rock Sioux and millions of people downstream.

Since April 1, individuals, groups and organizations from around the world have come together at Standing Rock to proclaim Mni Wiconi, Lakota for “water is life.” They have put their bodies and freedom on the line in support of the water protectors of the #NoDAPL effort. Veterans For Peace (VFP), on whose board of directors I currently serve, is one of these organizations. We released a solidarity statement in September. A number of our members have been actively involved in the campaign. In mid-October, I had the great privilege and honor of joining nearly a dozen of my VFP colleagues at the main resistance camp, Oceti Sakowin (the proper name for the Sioux, meaning Seven Council Fires). During my visit, I was welcomed with respect, kindness and love, and treated as a family member – a relative, a profound experience of Mitakuye Oyasin, a Lakota term/prayer meaning "all my relations" or "we are all related." 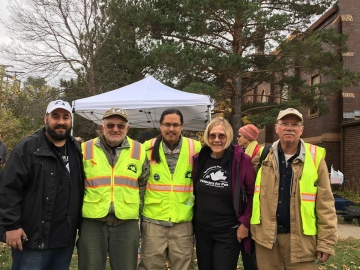 As of last week, DAPL construction was all but completed. It seemed nothing could stop the Black Snake, as the Native people call it (a moniker that is based on an old Lakota prophecy which speaks of a “black snake” bringing destruction and devastation). Then, last Sunday, following various legal decisions over many months that allowed the pipeline construction to continue, the easement to cross Lake Oahe was abruptly denied by the U.S. Army Corps of Engineers (USACE). The announcement came down just hours before an evacuation order for the Oceti Sakowin Camp, which was issued by USACE in late November, was set to take effect. USACE added that it would be undertaking an environmental impact statement (EIS) to examine possible alternate pipeline routes. The decision was hailed by many as a significant victory for the #NoDAPL struggle.

Following news of the easement denial, Standing Rock Sioux Tribal Chairman Dave Archambault II released a statement, which read in part: “…We want to thank everyone who played a role in advocating for this cause…Throughout this effort I have stressed the importance of acting at all times in a peaceful and prayerful manner – and that is how we will respond to this decision….We hope that Kelcey [sic] Warren, Governor Dalrymple, and the incoming Trump administration respect this decision and understand the complex process that led us to this point…Treaties are paramount law and must be respected, and we welcome dialogue on how to continue to honor that moving forward...To our local law enforcement, I hope that we can work together to heal our relationship as we all work to protect the lives and safety of our people. I recognize the extreme stress that the situation caused and look forward to a future that reflects more mutual understanding and respect.”

After months of waves of brutal crackdown tactics perpetrated against the water protectors by militarized police and private DAPL security forces, which included the use of attack dogs, sonic cannons, concussion grenades, rubber bullets, pepper spray, and water cannons in freezing temperatures, thousands of veterans, under the operation banner Veterans Stand For Standing Rock (VSSR), organized by Wesley Clark, Jr. (son of retired U.S. Army General and former presidential candidate Wesley Clark,) and Marine veteran Michael A. Wood, Jr., converged at Standing Rock to stand in solidarity with the resistance.

Based at least in part on their military experience, many of the veterans who joined VSSR wanted to intervene in and stop long-standing U.S. imperial policy of waging war for resources against vulnerable peoples. They understood that this was not something strictly happening abroad; it was also happening at home. They recognized that the violence against the water protectors was an expression of rampant U.S. militarism and structural white supremacy. They were aware that the targeting of Indigenous sovereignty by a colonial power is a strategic tool, used to dispirit, conquer and exterminate. They knew that the genocidal war against American Indians has never ended. Rather, it abates periodically until more resources are coveted, such as oil and lands to lay pipeline.

Violation of the basic human rights of our Native sisters and brothers in the name of profit has been a recurring theme throughout U.S. history, often carried out through acts of state terrorism. The militaristic response by the state of North Dakota and ETP toward the unarmed water protectors has been one of the most blatant examples of this theme to unfold in modern times. The veterans of VSSR, like the activists who came to Standing Rock before, could not stand idly by and allow these abuses to continue. These veterans felt an obligation to do all they could to stop the assault on this land's original peoples. As American Indian rights activist, author and educator Four Arrows said in a recently published article, “The courage recognized in many veterans seems inherent in all Indigenous peoples who have managed to follow traditional ways. This is why especially courageous veterans seem to get along so well with American Indians. In the Indigenous worldview that guided all of us for 99 percent of human history, generosity is the ultimate expression of courage and fearlessness.”

The VSSR mobilization, which included dozens of VFP members, was in its first official day when USACE’s rejection of DAPL’s easement was announced. It is reasonable to believe that the convergence of veterans at Standing Rock influenced the decision, even if only in some small way. Officials may have been acting to prevent conditions that could have led to a confrontation between law enforcement and the veterans, which would have been a national tragedy and a political nightmare. While we may never know for certain if VSSR had any sway over the decision-makers, it is safe to say that a considerable increase in the mainstream media coverage and public’s awareness of the situation occurred in the days prior to and during the VSSR operation. All things considered, the veterans played a small but important role in a much larger effort to prevent DAPL from crossing Lake Oahe.

Last Sunday’s decision was an historic win for American Indian rights and environmental justice. More specifically, it was a win for the Standing Rock Sioux and the millions of non-Native people who would have been put at risk by DAPL going under the Missouri. It is an affirmation of the strength of the resistance, which demonstrated that prayerful people, guided by the virtues of fortitude, courage, humility and peacefulness, can indeed overcome enormous adversity. The power of nonviolence that was harnessed by the Native-led struggle on the North Dakota prairie over eight long months chipped away at the foundation of plutocratic and corporate interests that frequently put profit over people.

Only time will tell if ETP has indeed been defeated. In a statement released by ETP just hours after the easement denial was announced, the company vowed to push forward with the pipeline on the route that takes it through treaty lands and under Lake Oahe. We know that the incoming Trump administration has different financial and business ties to the fossil fuel industry. ETP’s strategy may well be to bide their time until Trump takes office. Or, perhaps they will seek a legal ruling beforehand that could overturn USACE’s decision. The fight to force ETP to re-route the pipeline is probably not over.

The #NoDAPL resistance has not ended, nor should it. People should continue to divest from the banks financing the pipeline and urge these banks to reconsider their funding. People should contact their elected officials and demand justice for Standing Rock, including investigations into the hostile and unconstitutional acts of Governor Dalrymple and his police. Vigilance must be maintained and the prayerful and peaceful campaign must continue on the ground even in the wake of Sunday’s decision. History tells us that settler colonialism, environmental racism and corporate fascism are three very resilient evils. The resistance must be equally resilient.

Regardless of the future decisions and actions of the government and ETP and the nonviolent struggle against it, our children and grandchildren will be told of the historic unification of Native tribes and the efficacy of people power that made Sunday’s victory possible. It is imperative that we put our trust not in the promises of government but in the actions of people who hold their government accountable to those promises. Nonviolent direct action has been proven to work in grassroots movements and campaigns against oppression. Whatever the outcome of DAPL construction, the beautiful and enduring spirit of bridging differences to work collectively to protect and secure human rights, as seen in the #NoDAPL resistance, is something that will inform and inspire peace and justice efforts worldwide for many years to come.

Brian Trautman is an Army veteran, peace educator/activist, and national board member of Veterans For Peace. On Twitter @brianjtrautman.