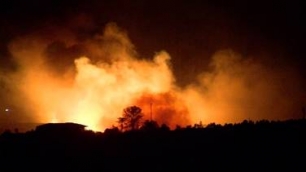 December 8, 2017 (San Diego) - Large, high-intensity wildfires are an inevitable and natural part of life in California. The destruction of our communities is not. But many of the political leaders we elect and planning agencies we depend upon to create safe communities have failed us. They have allowed developers to build in harm’s way, and left firefighters holding the bag.

The fires raging in Los Angeles County and Ventura are an urgent signal that we need to start asking the hard questions — about the true cost of expanding the local tax base with new residences in high fire hazard zones. We need to stop having the same conversation over and over again, a conversation laced with non-sequiturs and focused on outdated, ineffective solutions. The devastating loss of life, the destruction of so many family homes, and the dangers faced by those who protect us demand nothing less.

Some blame the current rash of wildfires on dead trees in forests—even if those fires are nowhere near a forest, or dead trees. (Members of Congress seem to have bought this explanation and they’re now pushing a bill sponsored by Rep. Bruce Westerman [R-Ark.] that would encourage more logging in the West.) Some blame climate change, claiming, for example, that rising temperatures are responsible for the devastating Tubbs fire in Santa Rosa in October — despite the fact that a bigger and just as fierce fire burned much of the same area in 1964. (Climate change is making our fire seasons worse, but it isn’t responsible for every big fire.) Yet others blame firefighters for creating dense stands of chaparral in fire suppression efforts—when that’s the only way chaparral naturally grows, dense and impenetrable.

The standard procedure to reduce wildfire risk is to clear habitat. We have spent millions of dollars doing this for nearly a century. Nevertheless, our homes keep burning. That’s because while vegetation management such as fuel breaks and prescribed burns can help during non-extreme fire events, they do little to suppress extreme events. But if anyone questions vegetation management in the backcountry, the typical response is that the projects will work as designed for 90th percentile weather conditions. That’s absurd. Imagine if we designed buildings to withstand only 95th percentile earthquake movements, or what you would feel as a result of a magnitude 2.5. We need to protect communities from fires that actually do the damage.

How do we do this? As University of Colorado geographer Gregory Simon has observed, since we are choosing to spread cities farther and farther out into wildland areas, we need to recognize that fire disasters aren't natural, they’re social. And they require social solutions.

Planning agencies need to push back against pro-development forces in government, whose willingness to build in known fire corridors borders on criminal neglect. The recent devastation of the community of Fountaingrove in Santa Rosa, for example, was both horrible and predictable. (The area has now burned twice in 53 years.) Local leaders need to restrict development in such areas.

In the smaller picture, local governments need to impose strict fire codes in new communities throughout California, require older communities to retrofit their properties, and enforce proper defensible space regulations. That means 100 feet of thinned vegetation, not bare ground. Hundreds of feet of bare ground make a home the target for wind-driven embers.

Such policies would cost significantly less than the $9.4 billion wildfire-related claims submitted statewide as of Friday.

We also need to examine the best practices of other fire-prone regions. Communities in Australia often install external, under-eave/rooftop sprinklers, which have proven quite effective in protecting structures during wildfires. (Australians understand that wet homes do not ignite.) Such systems should be standard in all new developments in high fire hazard zones. It is likely they would have protected many of the homes consumed in Ventura’s Thomas fire this week.

Agencies like Cal Fire need to begin addressing the question, “How do we protect lives and property?” rather than “How can we stop a wildfire?” Right now, Cal Fire is focused on the latter, with its misguided Vegetation Treatment Program. A focus on the former would mean at least noting land-use problems in planning documents. It would mean spending as much time and money on helping people retrofit homes ason vegetation treatments. Communities including Idyllwild and Big Bear have taken advantage of FEMA pre-disaster grants to replace flammable roofing and install ember-resistant vents. Such long-term solutions, unlike fuel breaks, do not require costly maintenance.

Trees, shrubs, grasses or homes will all provide the necessary fuel for a wildfire. It’s part of California’s story. As we do with earthquakes and floods, our goal should be to reduce the damage when wildfires arrive, not pretend we can prevent them from happening at all. That mindset starts at the planning department, not the fire station.

Richard Halsey is the director of the California Chaparral Institute.

Thank you for fixing this and giving the author the platform.

Very enlightening and on target