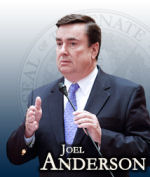 By Rex Lyons
November 8, 2011 (El Cajon) –There’s something very troubling about the newsletter I received from Joel Anderson, our Republican state senator.  It’s filled with stories about honoring the dead—naming a roadway for a fallen CHP officer,  breaking ground at a sports park named for the late President Ronald Reagan, and commemorating  9/11 victims.
But why isn’t Senator Anderson equally concerned for the many people in his district who are living in poverty, losing their homes, looking for jobs and lacking affordable healthcare?  El Cajon has a 29% poverty rate—the highest in our county. Why in the worst economy since the Depression does he completely ignore the many constituents of his who are in dire need?
Oh, sure, there’s a  photo of him posing with a check  being presented to some schoolkids—even though the check was from the Barona Indians, not the state.  I guess the Senator needed a photo op to look like he actually cared about our kids.
He certainly didn’t care about them, though, when he voted on all-cuts budget that slashed funding for their schools.  He wasn’t showing compassion for anyone who is hurting when he refused to consider any new revenue sources, not even taxing big oil with a wellhead tax. Every other oil-producing state has one.  We could have raised billions for our schools. But Senator Anderson and his heartless right-wing compatriots stood firm against every reasonable measure that could have balanced our state’s budget without harming public education.
The rest of his newsletter is pure fluff: a photo of an Anderson representative posing with a Marilyn Monroe lookalike at Grossmont Center’s 50th anniversary party, for example.  And a photo of Anderson schmoozing with his builder buddies.  Is that all he has to offer us?  Then there’s a photo op of another Anderson rep presenting a resolution to a tribal leader. Resolutions are free and available to any legislator who asks for one. So what?
Where’s the substance?  There’s not one bill authored by Senator Anderson mentioned in his newsletter. Not even a single vote he’s cast that he takes pride in, other than on a crime bill. Perhaps he is ashamed of his voting record.  He should be.
His votes are hurting senior citizens, students, teachers, sick people, and disabled people.  Although our state budget has been slashed by billions of dollars in recent years, cut to the bone, our Senator just keeps increasing the pain.  This year’s budget cut the number of Cal-Fire firefighters in San Diego County by 72.  God help us if the next Cedar Fire strikes.
Unless you’re a dead president, police officer or terrorist victim, one thing is pretty clear: Senator Anderson doesn’t care about you.  Apparently he cares more about the big corporations that give him money.  So much money that he laundered it through a Republican Central Committee last election, then had to pay a $20,000 fine when he got caught.
Sadly so far, no candidate has come forward to challenge Senator Anderson in next year’s election.  Let’s hope someone does, because East County deserves better than a  do-nothing State Senator who doesn’t care about the people he is supposed to represent.
The opinions expressed in this editorial reflect the views of its author and do not necessarily reflect the views of East County Magazine.  If you wish to submit an editorial for consideration, contact editor@eastcountymagazine.org.