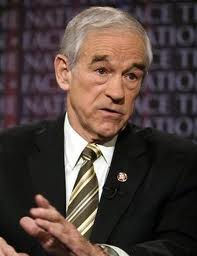 Apoplectic, neurotic and panic are but a few of the manifestations of the neocon state of mind. Their cold, calculating indifference to the plight of the ordinary American is about to be exposed, big time!

Their vision of an empirical America in a new world order is fading fast; and search as they might, they just can’t seem to find that critical but elusive “easy button.”

Try as they might, neither Fox News, Limbaugh or Levin can stop the march to
freedom.

Try as they might, the message of peace, prosperity and liberty can no longer be suppressed.

Try as they might, they cannot stop the truth from reaching the light of day; for all Americans to see.

Try as they might, there is nothing they can say or do -- except attempt to eviscerate the little man from Texas. Yes, friends, the gloves are off as the first round in a championship fight has just concluded.

Marginalized by most main stream media outlets, one cannot but conclude that the very powers that got us into this mess want to continue subjecting we, the people -- to more of the same illegal, irrational and unconscionable designs for world domination. ( View video clip:  Marginalized)

So, friends, the time has come to choose. Do you want to follow the power brokers along this insane path -- a path that has caused thousands of deaths and lifelong disabilities to our sons and daughters in the service of our nation; that has taken the lives of hundreds of thousands of innocent children; that, little by little, is eating away at our civil liberties; that has heaped trillions of dollars of debt upon our children and grandchildren; that has destroyed the once well-earned reputation that America is a compassionate, generous, friendly and just nation.

If that is what you want, then go ahead ... cast your vote for more of the same insanity.

But why ... why in the world would you ever choose a candidate who believes the Federal Reserve is a needed component of the U.S. economy? Why would you choose a candidate who, as middle class America struggles to survive, frets over keeping both job and home, conveniently looks the other way as the Federal Reserve SECRETLY LOANS $16 Trillion to American and foreign banks and businesses? Why?

I choose the man who cannot be bought; whose congressional voting record says volumes about his integrity; as he never once voted for something in which he does not believe.

I choose the man who embraces the concept of freedom, but knows it can never be achieved through the muzzle of an M1A1 Abrams battle tank.

I choose the man who best understands the entire paradigm of national security; who understands that maintaining seven-hundred overseas bases both drains the economy and complicates homeland defensive measures -- as is emphatically illustrated by the inexplicable failure to defend New York City on 9/11.

I choose the man who is unafraid to pronounce the war on drugs and the war on poverty as massive government failures that have cost both the economy and the American people trillions of dollars.

I choose the man who believes in goodness and is truly a good gentleman.

I choose the man who elected not to participate in the lucrative congressional retirement plan.

I choose the man who returns a portion of his House office budget to the treasury every year.

Me ... I choose the obvious. I choose a future that strongly suggests a world more at peace, expanding world economies stimulating the spread of prosperity everywhere, and the civil liberties consistent with a truly free society taking root on every continent.

Right cannot be wrong. Wrong cannot be right. Right action cannot lead to wrong results. Wrong action cannot lead to right results. Wrong action has to lead to wrong results. Right action has to lead to right results. Therefore, everybody owes it to himself to think, say and do what is right and to refuse to think, say or do what is wrong. -- Richard W. Wetherill