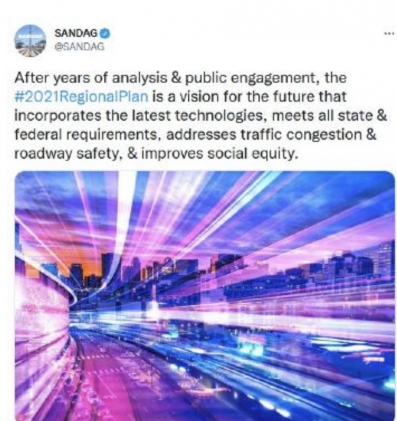 December 13, 2021 (San Diego’s East County) -- Last week, the County’s governing board called SANDAG made up of prominent elected officials voted for a long-range transportation plan and in so doing gave East County residents the shaft. Along party lines, they voted to possibly place an absurd gas tax, increase bike lanes and of course their favorite pie in the sky being the belief that residents in this County are suddenly going to flood public transit like locusts in the Western Sahara and walk everywhere while ditching their cars.

I listened to the entire meeting and heard the word equity used at least a million times. C’mon man! Sewn into all this hocus pocus are groups such as Circulate San Diego and a ton of bicycling groups pushing all this fairyland on a public driving more cars than Carters got liver pills.

As a Democrat, I object which would explain being persona non grata in the County Democratic Party. I object because of SANDAG’S failure to account for human nature and 10,000 years of recorded history. Humanity will always take the easy way out unless social norms say otherwise. We are not France, China or Brazil.  America was built on individual initiative. Plus, it’s just not feasible in Jacumba or Borrego Springs to catch a bus and or walk for ten miles for a gallon of milk.

I spend at least six weeks of the year training for endurance in East County while I live in San Diego and Le Havre, France. We are not the French where this plan could work. There exists a crippling social stigma to public transportation in America. On one hand, we profess in equality while on the other hand, we view mass transit as beneath us. Pardon the pun but switching gears to scooters, when was the last time you rode a scooter to a doctor’s appointment or to the store? How about walking 5 miles in the rain for a loaf of bread. One soon sees the absurdity of all this mumbo jumbo.

Here is my response to SANDAG’S board of director meeting last week. December 09, 2021:

Honorable Directors of SANDAG, this is San Diego resident and citizen Daniel “Danny” Smiechowski. I take a personal and passionate interest in alternative transportation and maintain grave concerns over the present framework of the City’s Climate Action Plan. Since the Summer of 1967, I have been walking, running and cycling local streets and unlike most residents, I have done this continuously unabated for over 50 years. I am a former Ironman and member of the coveted one-million-mile club. One million miles walking, running, cycling and swimming during my lifetime. At nearly 70 years old, I’m told by countless people that I have the best legs in California. But seriously, let the truth be told. Since the advent of the Trolley stop at Balboa Avenue several weeks ago, vehicular traffic in the area has gotten exponentially worse.  This is because San Diegans will not ditch their cars in favor of public transportation.  Mass transit unlike Milwaukee during the Sixties is beneath our fellow citizens excepting for mostly the downtrodden and a few lost tourists. Coincidentally, scooters have proven already to be a colossal failure. I say all this as being also a resident of Le Havre, France where the culture and society would gladly embrace your well-intentioned efforts but not in San Diego where Americans are too proud. Your reliance on getting residents to walk and take public transit is a foolish exercise in futility. It won’t work. This is not China, Germany or Brazil. Again, you are trying to change the stripes on a Zebra. We are too almighty and too proud in San Diego where luxury cars outnumber taco shops. Your group needs the advice of social psychologists and philosophers not politicians who cannot nor will not walk the walk, literally. As they say, “I’m from Missouri.”

On my way to train for endurance in Borrego Springs. Smiechowski
Borrego Springs is one of the nicest places on this planet.
It looks like the county is backing off of the per mile tax, which is good. I have held that collecting a road tax at the charger is much like we do with gas taxes at the pump. My students depend on the trolley - most of them don't drive because cars are largely out of reach for young people for logistical reasons as much as cost - and I am very glad for the new station at my workplace. It may become part of my commute soon, it is quite nice! For two years I took the trolley and the 150 express bus to work, until we moved to Shelter Valley to be with the solifugids and coyotes. (We are beyond east county, in the proper back country, landlocked by the ABDSP.) I would use the bus from Shelter Valley sometimes (although not for a daily commute to La Jolla), but it only comes on Friday. I think maybe it is a particular generation who hates public transit, one that lost to history and in the process left their children and grandchildren poorer for the first time in American history. It is time we move on from that generation, just stop listening to their angry stick shaking from the dust bin of history. https://www.eastcountymagazine.org/comment/48902