“…Innocent citizens in San Diego County are being defrauded because government officials are failing to protect the public they serve.” 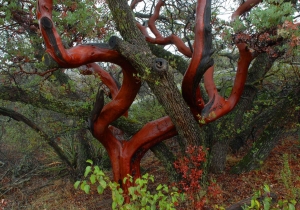 September 13, 2010 (San Diego’s East County) --Since humans have a tendency to be reactive rather than proactive, dramatic events are often catalysts that release a toxic brew of fear and dangerous decision making. For Californians, one such event has been wildfire. Although there have been some intelligent responses, fear and misunderstanding drive much of the rhetoric that influences our reactions to the fire-prone environment in which we live.

The false paradigm that underlies the rhetoric of wildfire has three basic tenets.

First, private citizens cannot be trusted to take care of their own property. Second, wildfires are the fault of the fire service because they have stupidly allowed unnatural levels of vegetation to accumulate due to past fire suppression. Related to this is the notion that nature “needs” to burn to clear out old, unhealthy vegetation. And finally, environmentalists have increased the risk of fire by preventing the removal of dangerous “brush” through lawsuits. As with most sound bites, the truth is hidden to promote a particular viewpoint. 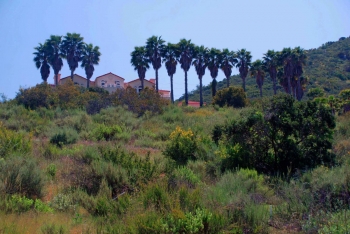 Defensible space laws have been enacted to compel private citizens to remove flammable vegetation that poses a threat to themselves and others. The idea is a good one. Thinning vegetation around a home is a critical component in the fire risk reduction equation. However, as with many laws, the implementation has been less than ideal. San Diego County’s approach has been especially egregious.

Since the San Diego Board of Supervisors decided to throw the responsibility for fire protection onto the backs of local communities several decades ago, poorly funded fire districts have struggled to provide adequate service for their citizens. In fact, although the County is one of the most fire-prone regions in California, it has one of the most poorly funded fire protection organizations in the state. Therefore, it should come as no surprise that there is not a coordinated, rational vegetation management program. 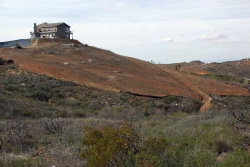 As a result, most fire districts have turned over the enforcement of “weed abatement” ordinances to private companies. In a clear conflict of interest, private contractors do the inspections, issue the abatement notices, and perform the work. While the local fire board is supposed provide oversight on forced abatements, in reality the board often acts as a rubber stamp. Similar to arrangements between cities and tow truck companies that prowl for cars to tow, the approach encourages abuse.

When the abatement notice arrives, some homeowners have it said it looked like junk mail. When attempting to understand what needs to be “cleared,” they have been met with confusion or unanswered phone calls. If the homeowner is not savvy enough to understand the procedures and the contractor ends up conducting the abatement, the bill can be staggering.

In one instance, an elderly couple in El Cajon was charged $5,340 by Fire Prevention Services (FPS) for clearance work the couple had done in previous years for less than $300. They fought the charge in court and a tax lien was placed on their property. They ended up paying the county $41,000 in 2009 to resolve the matter. The abatement appeal process has been described as a kangaroo court because the board that hears the appeal is the same one that approved the abatement.

It gets worse. Within a few months, San Diego County will be auctioning off a Dehesa Valley man’s home of 30 years because he refused to pay the $27,552 FPS charged him to clear less than a half acre of his property. Similar to what has happened recently in Bell, California, where government officials took advantage of their authority to enrich themselves, dozens of innocent citizens in San Diego County are being defrauded because government officials are failing to protect the public they serve.

Too Many Fires, No Chaparral 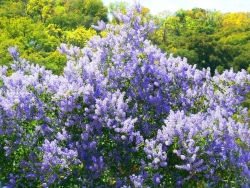 Fire is now seen as the Holy Grail of ecological revival. Past fire suppression is falsely blamed for nearly every fire, and Smokey Bear is characterized as a quaint failure. Native habitat has replaced fire as the ultimate evil. Distinctions between ecosystems are lost in the hysteria. For example, some mixed conifer forests in California have naturally small understory fires every 5-35 years. However, the natural fire return interval for shrub lands like chaparral can be a century or more. Yes, in some forests, vegetation has accumulated due to fire suppression. However, in the chaparral, there are too many fires.

In fact, had it not been for fire suppression, many of California’s native chaparral plant communities would have long turned into weedy landscapes like those seen east of Interstate 15 in Riverside County or between Lompoc and San Luis Obispo on Highway 101. Look around, especially at lower elevations. Those rolling hills covered with dried, highly flammable brown grass throughout much of the state used to be decorated with rich chaparral or coastal sage before they were eliminated by overgrazing and/or too much fire.

I am the director of the non-profit conservation group, The California Chaparral Institute. We took San Diego County to court to force them to follow state environmental laws. Why? Because the county wanted to avoid citizen involvement in spending $7 million in federal funds to remove dead trees that did not pose a significant fire risk to the community, trees that play a vital role in maintaining forest health by providing critical habitat. The court agreed with us and required the county to evaluate its project in a manner that would allow citizens the opportunity to participate in how and where their tax dollars will be spent, increase the number of communities that could benefit from hazard tree removal, and protect fragile habitat.

Replacing panic with rational decision making can be simple. Regarding clearance ordinances, require that fire officials have a face to face meeting with any property owner who is being subjected to a forced abatement order and resolve the problem collaboratively. Secondly, there must be an independent appeals board that is not politically or financially involved in the forced abatement process. And finally, remove the economic incentives to violate personal rights. Laws should be enforced by the government, not private companies focused on profit. 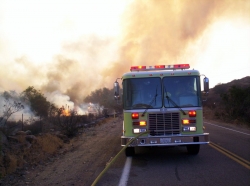 To foster a better understanding of fire and the role it plays in the environment, the fire service needs to help us accept the fact that wildfires are like earthquakes. They’re going to happen no matter what we do. It also needs to be made clear that vegetation management is only part of the total fire risk reduction equation.

The fire service must spend as much time and money promoting fire-safe home retrofits and explaining the hazards of ornamental vegetation like Mexican fan palms as it does on thinning native habitat. And private citizens need to be given the opportunity to be part of the fire emergency process whereby those who are willing and trained, can stay behind and help protect their communities during a fire event.

Nature is not the enemy; it’s something that has value and brings joy to all of us. We need to appreciate and become familiar with the environment in which we live. The media can help in this process by curtailing its sensational commentary every time there’s a fire. What’s burning is not “fuel” or “brush that hasn’t burned in decades,” but often beautiful, old-growth chaparral that represents one of our region’s most priceless, natural resources.

An important clarification I would like to add to this editorial is that there are some notable exceptions in San Diego County to the pattern of abuse in the enforcement of vegetation management ordinances. For example, the North County Fire Protection District terminated its contract with Fire Prevention Services about 7 years ago and has implemented the recommendations I suggested in this editorial. During this time, the District has had only a handful of forced abatements - all of which were out-of-town landowners (mostly bank-owned, foreclosed properties).

Although everyone from the San Diego Rural Fire District Chief, to County Tax Collector Dan McAllister, SD County staff, and legislators in Sacramento have agreed that the situation described in the editorial is outrageous, no one has been willing to help solve the problem. They have all said it is out of their hands, the court has ruled, etc. Meanwhile, a man will be losing his home.

I have received calls from dozens of citizens asking me to help with their experiences with forced abatements. I have stacks of cases where innocent people have been taken advantage of by clearance contractors, have asked for help from the system (from appeals boards to courtrooms), and have lost hope because of the callous treatment they have received.

The whole experience has caused me to question the integrity of not only those directly involved, but many of those who are in a position to speak out but have failed to do so. Even though SD Rural terminated their contract with Fire Protection Services after massive numbers of citizen complaints, they still have a lot of left over baggage that needs to be dealt with. Unfortunately, their board continues to sit in stony silence as citizens describe the pain they have caused.

It is my hope that other fire districts will follow North County Fire's leadership and reject the model where private contractors are allowed to abuse the rights of private citizens.