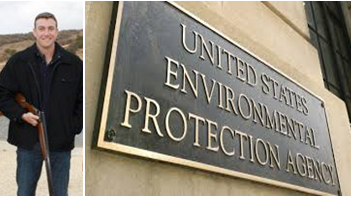 “Be aware that if any of my students made the statements you are erroneously posing as fact they would fail the course…”—Reneé Owens, environmental science instructor

February 19, 2017 (San Diego’s East County) -- Yesterday I sent my Congressional Representative, Duncan Hunter Jr., a message urging him not to weaken or dismantle our Environmental Protection Agency, as the 2017 Congress is threatening to do. If anything the agency needs strengthening and more funds to do their jobs. Today he responded, telling me the EPA is a big problem. I know something about the EPA in my line of work, so I felt obligated to respond:

I have worked as an environmental consultant in southern California and Latin America since the early ‘90s. Along the way I have reintroduced endangered crocodiles, caught and released over 800 anacondas, and tracked jaguars in countries with no EPA or enforcement of environmental protections. I never once feared these animals. What I did I fear were the humans who cared nothing for them or their habitats, because they are the same habitats that keep us alive and well and provide trillions of dollars in ecosystem services when they are protected and respected.

When they are not protected, as they are not in many third world countries, I can tell you who suffers: everyone, because when water and air are polluted, having a ton of money does not necessarily protect you from the ravages of cancer, immune dysfunction, or a community that cannot sustain itself because it destroys the very Nature it relies on.

I am also a college environmental science instructor. Be aware that if any of my students made the statements you are erroneously posing as fact they would fail the course, since what they learn is based upon science, history, and facts; not a fabricated mantra marched out and repeated with the singular goal of making unethical corporate CEOs richer while the rest of us suffer.

I am well versed in what authority the EPA has, and what authority it actually uses, now and in the past. Therefore, I can say with complete confidence that you have no idea what you are talking about when you say in your email,

“Throughout the Obama Administration and in many previous administrations since its inception, the EPA has drastically overstepped its authority to advance a political agenda that often fails to take into serious consideration the economic well-being of states and local communities. As a result, communities are stripped of jobs and economic mobility because of unaccountable Washington bureaucrats who are often more accountable to special interests than the American people they are employed to serve.”

This statement is so incorrect that it would be humorous if we weren’t talking about the health and welfare of millions of people, animals, and our earth; all at stake due to you and the majority of this Congress’s lack of insight on the subject. In my line of work, I have watched for 25 years as environmental regulations and protocols create many thousands of career jobs helping ensure that businesses do what they need to do while taking care not to cause undue and irresponsible harm.

The EPA, when it asserts its authority (which it very often does not due to budget and other constraints) urges unethical companies to follow the precautionary principle, that thing that helps keep arsenic and lead out your drinking water, deadly carcinogens out of the air your children breathe, and helps protect our beautiful wild lands that provide billions annually in non-consumptive tourism. EPA oversight helps to protect pollinators of our food, wetlands that naturally filter toxins from our water, forests that absorb extra carbon from our warming atmosphere, and parks that provide recreational and spiritual inspiration to millions, to name just a few.

San Diego County has the highest biodiversity of any county in the nation, and yet I get the feeling you would sell its priceless biological value to the highest corporate bidder. After all, your record for protecting our environment is pretty poor: you have repeatedly voted to undermine river and other wetland protections, repeatedly voted to bar the EPA from regulating greenhouse gases and other air pollutants, voted yes to drilling for oil in fragile marine ecosystems that host billions of krill - the foundation of the ocean’s food chain - and endangered whale breeding grounds, and even voted yes to slaughtering thousands of free-roaming horses. And yet you have voted in favor of almost every bill that serves the fossil fuel interests over our nation’s environment, including support of the Keystone XL pipeline. The EPA helps keep us healthy by keeping our environment healthy. If you weaken it, you undermine our nation’s health. Given that you voted for the repeal of Obamacare with no feasible alternative in sight, how do you expect your newly uninsured constituents to deal with the increased health issues they will become victims of as our air and water become more polluted?

I find the flippant ease with which you trade protections of our air, water, habitats, wildlife, and human health for the support of greedy corporations to be reprehensible. I am additionally aware that just yesterday you voted in favor of allowing hunters throughout 76 million acres of Alaska’s remaining wildlife Refuges to kill sleeping bears and newborn wolf pups in their dens; gunning, trapping, poisoning, baiting them all in the name of fun and profit. Surely only a coward would get a perverse thrill from such a thing. Is this a story you will proudly tell your grandkids, how you use your political power to support shooting wild wolf pups for entertainment?

Mr. Hunter, I have been a volunteer in my community and abroad for decades. I deeply wish we had common ground upon which we could find compromise. But your statements now and in the past clearly are not based upon fact, or have the well-being of the majority of your constituents in mind. Therefore, be informed that your actions to degrade and sicken the Earth that supports us all - regardless of political party or religion – only serve to fuel my energies tenfold so that you and your like-minded colleagues will be outvoted as soon as the next opportunity arises.

Renée Owens’ conservation research on endangered wildlife in Venezuela has been filmed by National Geographic, Discovery, BBC, and Dateline NBC, and was recipient of the National Geographic Research and Exploration Award. She is a regular contributor to the EcoReport and other outdoor magazines.