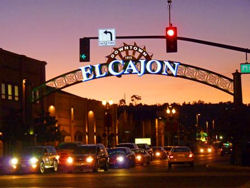 By Bonnie B. Price

October 2, 2012 (El Cajon)--As campaign season draws nearer to the November 6 election, contenders for the three city council seats are having a strange type of conflict in the wonderland of El Cajon campaign politics.  Issues such as the highest sales tax in the county and high sewer taxes* in the poorest city in the county are not being discussed.

Instead, people have been distracted from these significant issues with a battle over political sign locations!

By chance, on September 9, El Cajon resident Karen Marie Otter intercepted Councilman Bill Wells with John Gibson, an executive with the Hamann Corporation, and another unknown man. According to Otter, they had a truckload of signs for Ambrose and Wells, both incumbent council members seeking re-election. (Editor’s note: Wells has denied being present during any sign removals.)

Otter says she watched while a Ben Kalasho sign was removed by the man in the car with Wells. The sign was taken down at a lot commonly used by many candidates in the past to post their campaign signs.  In place of the Kalasho sign, a notice was posted that warned: “Only Lincoln Club endorsed candidates can post signs here.”  An Ambrose and Wells sign was also posted where Kalasho’s sign had been.

The Lincoln Club is a political action committee (PAC) funded by unknown sources; it is authorized to operate in the City of San Diego, not El Cajon or any other place in the county, according to records at the Secretary of State. (See more here:

http://www.sdlincolnclub.org/,   https://www.facebook.com/lincolnclub, ) One of the men told Otter that the property belonged to Daryl Priest.  Otter followed the truck around town while more of the same occurred at many properties, including one that is known NOT to be owned by Priest NOR managed by Hamann Corporation. As she tailed them, Otter reported that Wells seemed to disappear after a stop to post signs.  She tailed the truck for about an hour. She called me three times during this incident as she informed me of this situation.

At the city council meetings that followed on September 11, the issue of a city council member stifling Kalasho’s freedom of speech by removing and stealing campaign signs was raised at both day and evening sessions.  (I did not attend the afternoon session.)  The evening session was delayed to recruit speakers to rebut allegations expected from the group that had come to defend Kalasho. During the evening session, Mayor Mark Lewis required all speakers to look only at him when they spoke, instead of any other elected official.  Not intimidated by this requirement, Otter demanded the resignation of Councilman Wells. I followed with a message that such behavior as Councilman Wells committed should not be tolerated.  Mayor Lewis did not like the reference to Wells, despite the writer’s constant eye contact with the mayor.   What a wonderland!  The mayor took exception to a councilman being named as a participant in violations of the law which were observed and reported to the police!

John Gibson also spoke to defend his own actions, saying he was doing his job as a property manager in response to calls from property owners who did not want Kalasho’s signs posted.  Two others recruited while the evening meeting was delayed also spoke about protecting private property.  None recognized that Kalasho’s signs were private property that should not be torn down and defaced or stolen by them.  Also, they did not acknowledge that Kalasho in fact had permission from leaseholders to post some signs that were stolen.

The mayor finally allowed the council members to respond.  Wells spoke first, saying: “I never touched those signs.”  Bob McClellan stated that his signs were not up yet.  Tony Ambrose noted that he wasn’t there. Kendrick responded to the effect that he is not a candidate this year.  Mayor Lewis continued the meeting, dealing with other issues.

At the next city council meetings, on September 25, more of the sign-related protests occurred, with the mayor continuing to insist that speakers look only at him.  In the wonderland of El Cajon politics, one must wonder why there are councilmen at all, if they are not considered as full meeting participants.

One of the afternoon speakers, Gloria Martes, at the end of her complaint about Wells’ failure to report on legislation that he disliked, noted that El Cajon is not a monarchy. I complained about the removal of the signs and questioned the legitimacy of the Lincoln Club’s endorsement determining who should place political signs on property.  I noted that the Lincoln Club represents the very wealthy; I also expressed hope that the police would do a thorough investigation to bring justice to the culprits.  When Gibson followed, he defended the East County Lincoln Club as comprised of local enterprises and people organized to participate in politics.  (The East County Lincoln Club is an unregistered political action committee (PAC), allegedly a branch of the Lincoln Club of San Diego County.) (https://www.facebook.com/pages/The-Lincoln-Club-of-San-Diego-County-East-County-Chapter/348746388536862 )  He also attacked Kalasho’s supporters and disparaged Kalasho’s ethnicity with a bigoted statement.  Kalasho responded by chastising the mayor for allowing such a racist attack in a public meeting.

The mayor moved on to the next item on the agenda.  In the wonderland of El Cajon politics, the mayor’s action made it legitimate for a corporate executive to make an ethnic attack on a community leader who wants to return the city to its full potential!

I did not attend the evening meeting on September 25.  However, reportedly, Kalasho and Gibson again had a sparring match, with Kalasho outnumbered by 5 to 2.  Strangely, because of a technical glitch, Kalasho’s comments were not recorded on the videotaping done by the city.  Kalasho took a stand that no public comments should be shown on Channel 24 unless his were included.  City Manager Douglas Williford agreed. It appears that some small justice can be found in the wonderland of El Cajon campaign politics.

It’s time for campaign politics in El Cajon to focus on something other than political signs. Let the police do their job on that.  It’s essential that city residents really begin to learn how incumbents and challengers for the three council seats will serve the city.

How will each candidate address the 30% of the population that lives at or below the poverty line? How will they manage the scarce resources available to the city?  How do they stand on no-bid contracts that drive city costs up?  Will they continue the highest sales tax in the county and high sewer rates?*  Will they deal with the issue of building vacancies?  Will they restore jobs for those who cannot find work?  These and other questions should be given to candidates at the October 3rd Candidate Forum at the El Cajon Police Department.

In the wonderland of El Cajon campaign politics, it’s high time for citizens to demand an honest campaign and bring an end to distractions.  It’s time to focus on real problems facing real people!

* Editor's note: Councilman Kendrick has sent information disputing that the city has high sewer rates despite a recent rate increase.  "Attached is a report from 2011 showing we had the lowest sewer rates in the county," he writes. "It also shows the even with the increase we are still below average for the county.  Please note the table shows other cities before their rate increases for 2012."

Price stands by her contention that the rate hike is overly steep in a low income community. To view the actual rate changes, which vary by usage, click here.