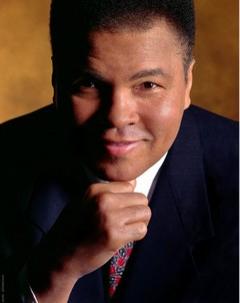 Most of us are fine spending our lives going with the flow. Very few if any want to swim against the tide. Even fewer appear comfortable doing it. We are not sure, if at all, how we are going to look coming out on the other side. We are content in our zone, afraid of the consequences, the inherent risks of failing and that of a wasted life.

Then there are these supreme legends. They pick up a cause of some difficulty or excel in their field of specialization and devote their lives to it. In the course, we know them as Nelson Mandela, Mother Teresa, Albert Einstein and all. Their contributions and stature are second to none.

This man went against the tide on several issues, looked comfortable doing it and came out looking good on the other side and all the while excelling in his primary sport of boxing.

As for a few examples:

He punched the face of war. He poked in the eyes of racism. He converted to Islam in the days of “Islam who.” He was a boxer like no one before or after him, and he showed us how to be all this and still live with grace and magnanimity while shaking uncontrollably with a lethal disease for years.

Muhammad Ali lived several lives, several role models, several legends, compressed as one. The self-revered, the Greatest and the most Beautiful, actually was.

And thus, I believe, he was the most relevant, the most admired, the most known name and face on this planet in our times. A thorough champ through and through.