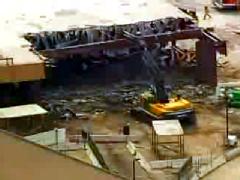 September 14, 2011 (San Diego) – I-5 is now open and a SIG alert cancelled following collapse of a construction platform that landed on vehicles and injured 11 people, one seriously, at the San Ysidro border crossing this afternoon.

David Burnight, a ECM reader from Crest, describes his close call—and how the accident impacted his plans to return to the U.S. following a dental appointment in Tijuana.

Around 12:45, Burnight and his son, David Sawyer, were walking across the border on their return home when “we saw all the fire engines and emergency vehicles over on the `Return to U.S’. side,” he wrote in an e-mail to ECM. “Apparently the construction scaffolding above the return lanes had crashed, about a half hour before! We were five feet from the border gate when we asked a Border Patrol officer what was happening, and learned that all the return to U.S. lanes and pedestrian lane were closed for the day!”

He reflected, “Had we gone through the gate we would have been trapped.”

Though safe, Burnight and his son still faced an ordeal. “Otay Mesa crossing is a long taxi ride away,” Burnight said of the nearest open crossing into the U.S., “and another long taxi ride on the U.S. side to get back to our parked car.”

I think the things you covered through the post are quiet impressive, good job and great efforts. I found it very interesting and enjoyed reading all of it...keep it up, lovely job..
ups prices