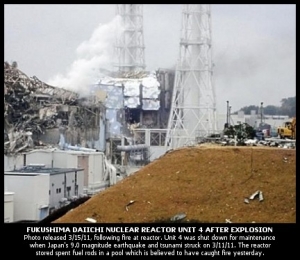 According to the Institute for Southern Studies, the nuclear industry has spent at least $640 million lobbying during the last decade.

Although there are several deep budget cuts proposed for social and environmental programs, President Obama has budgeted another $36 billion dollars in loan guarantees even though the nuclear industry should be seeking private marketplace financing for new construction. This amounts to a bailout for the nuclear industry.

The federal guarantees were first authorized by Congress in 2005. The New York Times reports that "a one-sentence provision" was buried in the energy bill and inserted without debate at the urging of the nuclear power industry, making nuclear plants classified as clean energy and eligible for tens of billions of dollars in government loan guarantees.

Apparently the lessons learned from the 1986 Chernobyl power plant reactor meltdown that caused the worst nuclear accident in history were forgotten. In the United States in 1979, we almost had a partial meltdown at Three Mile Island but the reactor was brought under control just in time.

With the meltdown of nuclear reactors in Japan, our government leaders, charged with protecting the health and safety of our citizens, should carefully evaluate the risks of nuclear power plants.

No matter how the industry spins it, nuclear power is not safe and will never be until the waste problem is solved. Thirty years later, we have not solved the dilemma of storing nuclear waste or the problem of what to do with the weapons-grade plutonium. It only takes about 18 pounds of plutonium to build a nuclear weapon.

In the United States, more than 60,000 metric tons of nuclear waste is stored in temporary storage facilities at 131 civilian and military sites around the country. The current storage solutions are only expected to last 100 years, while nuclear waste can remain lethal for 100,000 years or more. The government has no long term plan to store the waste and insure the waste does not remain an environmental hazard.

We must also consider the weapons proliferation risk in an age of transnational terrorism in addition to the risk of an environmental accident. These are just some reasons why we must adopt alternative renewable energy standards and use renewable energy sources rather than build 100 more nuclear power plants.

In the United States, a conservative solution is to invest in clean energy sources that do not pose risks inherent in nuclear energy production and storage. These sources include creating bio-energy from plant matter or animal waste. For example, in Northern California, Pacific Gas and Electric Company and BioEnergy Solutions are building an innovative bio-gas project in Fresno County to deliver renewable natural gas derived from animal waste, reducing the carbon footprint at its source.

In San Diego, San Diego Gas and Electric Company has announced a partnership in a wind project on the Campo reservation using renewable energy. This month SDG&E also announced a 25-year contract to generate solar energy from a proposed 1,057-acre solar energy facility near El Centro which would create almost 300 construction jobs in a two-year period.

Rather than subsidizing nuclear power plants or off-shore drilling, an alternative approach is needed. Using concentrated solar energy we could power the entire United States annually. The public already owns the right-away along the state and interstate highways. It does not take a lot of imagination to conceive of a solar-electric array 100 feet wide and 100 miles long, or any number of miles. Since the highways pass through cities that need electricity we would have connectivity where every American could see their tax dollars at work.

While those in favor of building nuclear power plants argue that nuclear energy is inexpensive, they have not factored in the costs and risks associated with the building and maintenance of storage facilities for the nuclear waste or the cost to our people's health and the environment if there is a problem with the nuclear reactors. If they had to factor in the cost of insurance to pay for these risks, nuclear energy would not be inexpensive.

America should have vision. Consequently, the United States should consider phasing out its nuclear power plants over the next generation and begin investing in other safer renewable energy sources. We can lead the world in clean energy technology.

It does not take a lot of imagination to conceive of a solar-electric array 100 feet wide and 100 miles long, or any number of miles. -Yochanan Berkowitz