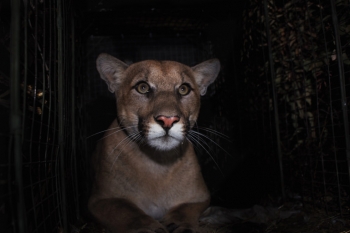 Photo:  Mountain lion P-61 was struck and killed on the 405 Freeway in the Sepulveda Pass after being chased by another male cougar on Sept. 7, 2019. National Park Service photo

The following weekend, two more mountain lions were killed, one while attempting to cross the I-5 freeway north of L.A., and another on the 280 freeway in San Mateo County.

A mountain lion was killed on State Route 67 in Lakeside in late September.  Photo, right, screenshot from Brush Fire Partyline. 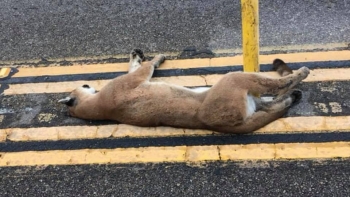 Each year approximately 100 mountain lions are killed by vehicle strikes in California. Our lethal highways—combined with other threats—are pushing some cougar populations to the brink.

Scientists predict that Southern California’s coastal lions could disappear in the next 50 years unless we protect them. Central Coast populations are showing similar trends.

That’s why our organization, the Center for Biological Diversity, and the Mountain Lion Foundation petitioned state officials in June to list Southern California and Central Coast cougars as threatened under the California Endangered Species Act.

That would be a crucial step to solving a larger problem highlighted by the dead mountain lions on our highways: roads and sprawl development built with little consideration of cougars or other wide-ranging animals.

Highways and sprawl block mountain lions from dispersing and breeding, which has caused dramatic declines in genetic diversity in some populations.

Barriers also help push mountain lions into towns and areas with lots of livestock. About 100 kills are reported every year under depredation permits, which can be acquired if a cougar attacks domestic animals.

Others die after eating animals that have ingested rat poison. A recent government study found that more than 90% of mountain lions tested had been exposed to super toxic “second generation” rodenticides. Just last month a 6-year-old male cougar in the Santa Monica Mountains bled to death internally from rodenticide poisoning.

Listing imperiled cougar populations under our endangered species law would finally give state and local decision-makers a clear legal requirement to protect them.

State agencies including Caltrans would have a mandate to build crossings on existing highways and incorporate crossings into new projects. And counties would need to coordinate with state officials to ensure that development projects do not harm mountain lions.

Mountain lions go out of their way to avoid people. But even though most Californians will never see a cougar in the wild, we all benefit from their work as ecosystem engineers.

They control deer populations and prevent overgrazing of sensitive vegetation, thus safeguarding California’s biodiversity. Cougar kills provide food for a host of other species, including the critically endangered California condor.

Mountain lions even benefit human health and public safety. In the eastern U.S., where cougars are extinct, an overabundance of deer has resulted in increased vehicle-deer collisions and increased tick-borne illness among humans.

Here in California we pride ourselves on protecting wildlife. We voted to ban sport hunting of mountain lions almost 30 years ago. But today some of our mountain lion populations have lower rates of survival than hunted populations elsewhere.

Fixing that requires more wildlife crossings, which would make roads safer for mountain lions and people.

A Lake County collision in July killed a mountain lion and injured nine people, and the California Highway Patrol reported 15 deaths and 810 injuries from wildlife vehicle collisions between 2017 and 2018.

In Colorado and Wyoming, officials have built wildlife crossings, and there has been up to a 95% reduction in wildlife vehicle collisions.

As an environmental leader and the world’s fifth largest economy, California can do better. State wildlife officials need to give cougar populations the endangered species protections they desperately need.