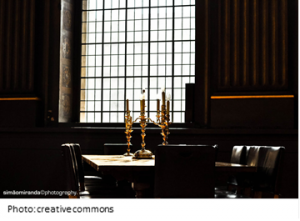 November 20, 2017 (Sacramento) -- This Thanksgiving, too many American families will have empty seats at their tables due to the Trump Administration’s cruel and indiscriminate deportations. Thousands of other families will be giving thanks while worrying if their loved ones, who are facing imminent threats of deportation, will be around to celebrate with them at the next holiday. These stories, all too common across America, include:

In California, the Press Enterprise highlights the story of Ramon Ruiz Ortiz, who was separated from his family and deported to Mexico in May.

Ruiz’s case is one that Southern California immigration advocates signaled as a shift in enforcement. He was an undocumented immigrant with no criminal record who was deported when his application to adjust his legal status was denied. Previously, people who did not qualify were just denied, not deported ...

He left his wife Norma Perez, 42, his daughter Luisa Ruiz, 16, his youngest son Sebastian, 5, and his stepson Erik Silva, back in Moreno Valley. “It’s something very difficult,” said Ruiz, who was born in the Mexican state of Jalisco. “Being separated from my children, my wife, it’s very hard. It was a drastic change. All the plans we had made … The future was a lot different from what we are living right now.”

In Texas, a New York Times documentary video tells the story of Juan Rodriguez and his mixed immigration status family, including three U.S. citizen daughters. After checking in for 11 years with immigration officials, Juan now faces deportation to El Salvador. The powerful video is viewable here.

In Ohio, the Dayton Daily News tells the story of Fatiha Elgharib, a mom of four, including a child with Down Syndrome. After 21 years in America, Elgharib faces a deportation to Morocco on the date of November 27 (see more background here, with excerpts from the Daily News below).

Sara Hamdi is still trying to figure out how to tell her brother, Sami, that their mother will be getting on an airplane after Thanksgiving and there’s no saying when they will see her again. Their mother,, received orders recently that she is being deported back to Morocco on Nov. 27 for over-staying her visa after living in the country since 1995. Sami, a U.S. citizen because he was born in the U.S., has Down syndrome.

As Sami’s primary caregiver, Elgharib gets him up every day at their Englewood home, helps him dress, gets him to school, makes his snacks and gets him to doctor’s appointments for myriad health issues he has. “When he comes home from school and walks in the door…if he doesn’t see her when he walks in that door he’s asking, ‘Where’s mom,’” Sara said. “We’ve just been hinting that my mom is going to visit Morocco but he doesn’t really understand what’s going on,” she said. “I don’t know how to tell him for him to understand.”

Also in Ohio, the Cleveland Plain-Dealer and local NBC affiliate WKYC cover the support for Esperanza Pacheco, a local woman facing imminent deportation this week in another example of a silent raid:

Pacheco, a married mother of four U.S. citizen daughters, was taken into custody Tuesday for deportation. She's been a Painesville resident for more than 25 years.

In Connecticut, the Hartford Courant shares that Stamford mom of two Miriam Martinez-Lemus is facing imminent deportation today to Guatemala, a country she fled in 1992 following death threats.

Since 2012, Martinez-Lemus has been checking in with ICE and has been granted stays of removal preventing her deportation and allowing her to stay with her family, her husband Raphael Benavides said. “Besides the fact that she’s a human being, she’s a mother, she’s a wife. We’re a family,” he said. “That’s what we’ve created. We wanted our children to grow up in a healthy environment.”

[after fleeing Guatemala], she moved to Stamford, where she has lived since with Benavides, and their two daughters — Brianna, 12, and Alison, 10, both of whom are U.S. citizens. Martinez-Lemus said Brianna was diagnosed two years ago with juvenile Type 1 diabetes, a condition that requires her to receive constant care and supervision. “Mom is the backbone of this whole operation,” Benavides said.

...Since 2012, Benavides said his wife has been reporting to ICE for yearly check-ins and each year she has filed for stays of removal that would prevent her deportation. Every year they have been granted, but Benavides said that his wife’s latest application, made in August, was denied. “It was scary. It was beyond horrendous to put that thought in our minds and then passing that information to your children that that’s something that might happen was horrific,” he said.

...“We ask people of faith to pray for Miriam and her family … The United States is a country of heroes and good guys. We are kind, compassionate and we are not cruel. The decisions of our government should reflect who we are.” [said Catalina Horak, the executive director of the Stamford-based organization Building One Community]

According to Frank Sharry, Executive Director of America’s Voice, “For most Americans, the Thanksgiving holiday is a time to share a slow meal and conversation with extended family.  This year, far too many families will sit down with an empty chair due to a loved one’s deportation.  A year after Trump’s election, he has clearly made good on his promise of deporting as many people as his agents can get their hands on.  This mass deportation strategy has brought tragedy and pain to many American families, including U.S. citizen children, with no real benefit.  These deportations are being carried out in our name, paid for by our tax dollars, and we as Americans need to stand up and say this is not acceptable.”