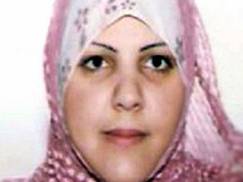 April 6, 2014 (El Cajon)--The body of Shaima Alawadi, 32, was found by her daughter Fatima (then 17) on March 21, 2012. She  told El Cajon police that she was asleep upstairs, heard her mother "squeal," followed by the sound of broken glass. She thought perhaps her mother had dropped a plate, and waited about ten minutes before going downstairs.

Her father, Kassim Alhimidi, has been charged with his wife's murder, and in opening statement of his trial which began April 1, the 911 call made by Fatima was played, and it reveals that she said "scream," not "squeal." The glass that was broken was a full-length window and a sliding glass door, which would have created a very loud noise.

In the days following the attack, Fatima claimed to have found a note next to her mother's body. At a preliminary hearing in July, 2013, however, a paramedic said he found the note, which was folded and on the floor of a small room near the room where Shaima's body was found.

Under cross-examination on April 4 by Richard Barkon, one of Alhimidi's attorneys, Fatima admitted that she never saw a note next to her mother's body.

In November, 2011 (four months before the attack), Fatima was seen in a car possibly having sex with her 21-year-old Chaldean boyfriend. Police were called, and Shaima came to scene. Fatima got into a car driven by her mother, and, according to police affidavits, said "I love you, mom," and jumped out of the car when it was going about 35 mph. She was upset because of an upcoming aranged marriage to a cousin in Iraq.

When asked by Barkon whether she made the statement to her mother,  Fatima said  she "can't remember" saying that. She was shown the police report, and  said "I still don't remember."

She told Barkon that her "romantic" relationship with her boyfriend ended shortly after the November incident. She was shown text messages to her boyfriend showing that she was arranging for him to sneak into her room at night after her parents were asleep; the latest incident was March 15 (about a week before the attack). Fatima then admitted that she did "sneak" him into her room, but didn't remember how many times that happened.

Fatima was asked about two telephone calls she received while paramedics were working to revive her mother. She allegedly told the caller that someone she didn't know entered the home, hit her mother with a bar, left a note next to her mother's head, then "jumped in front of her" and broke the (sliding glass) door. She denied making those statements, and was told by Barkon that the calls were "recorded."  (They were recorded because the caller was a jail inmate, a fact which the judge decided would not be revealed to the jury.)

Fatima said she did not make those statements; the call was in Arabic, and she did not agree with the translation.

Cross- examination will continue on Monday, April 7. Will there be more bombshells?