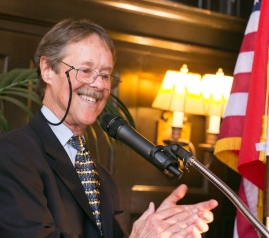 March 10, 2018 (Washington D.C.) -- Donald Trump’s extraordinary decision to meet with Kim Jong-un has taken all the policy hawks by surprise—and led them to issue all kinds of warnings of impending disaster.  Trump’s decision is extraordinary because until now the common refrain from him and all other US policy makers was that the North Koreans would have to provide evidence of moving toward denuclearization before any talks could take place.  To do otherwise, as Trump once said, would be to follow the ruinous path of previous presidents, who were supposedly suckered into sitting down with North Korea and making unilateral concessions.

Now Trump, perhaps in an effort to turn the spotlight away from his domestic problems—the Stormy Daniels affair, the Rob Porter affair, the Russia investigation, the tariff announcement, the Gary Cohn resignation, etc.—has agreed to talks with nothing more than a promise from Kim to put denuclearization on the table.  The hawks are in full throttle over this seeming concession.  Max Boot of the Washington Post writes, for instance, that Trump risks “giving the worst human-rights abuser on the planet what he most wants: international legitimacy. Kim will be able to tell his people that the American president is kowtowing to him because he is scared of North Korea’s mighty nuclear arsenal.” Victor Cha, who was slated to be Trump’s ambassador to South Korea until he chafed at Trump’s war talk, warns that “the [North Korean] regime never gives away anything for free.”  Cha advises that Trump keep up the sanctions and military pressure that presumably had something to do with Kim’s invitation to a summit.

Let’s try to be objective here: both Pyongyang and Washington have given up something to get to the table, and both have preserved crucial options.  Kim Jong-un has promised to halt nuclear and missile testing and accept the reality of US-South Korean military exercises.  But his willingness to talk about denuclearization does not mean stopping nuclear and missile research and production, much less reducing his weapons arsenal.  Trump has dropped the “no talks” line, but has made clear that sanctions and other forms of “maximum pressure” will continue.  The concessions thus far are mutual, welcome, but very limited. I can imagine that Kim, like Trump, will tell his inner circle that “I haven’t given away anything.”

Hawks like Boot and Cha can’t stomach giving North Korea the international legitimacy it craves.  But that is precisely the kind of symbolic gesture that galvanizes an engagement process.  As the South Korean delegation reported following its meetings with Kim, he wants North Korea to be considered “a serious partner for dialogue.”  That’s not a concession; it’s a necessary incentive for moving forward.  And it should be accompanied by a mutual agreement to cease name calling and stereotyping, at least while talks are in progress.

The US and North Korea have an opportunity to move away from threats and toward a major defusing of tensions.  Denuclearization—that is, the dismantlement of all North Korea’s nuclear weapons—is only likely to come about, if at all, after both sides take other steps, such as a verifiable freeze on nuclear and missile testing, normalization of diplomatic relations, security guarantees to the North, resumption of economic aid to North Korea, and framing of a peace treaty to finally end the Korean War.  A Trump-Kim summit at best can only set the stage for discussion of these topics.  But as Churchill said, it is far better to “jaw, jaw” than “war, war.”  The hawks’ warnings do not help matters, and in the end they may yet upset the apple cart.

When a commenter ignores facts and continue to attack our publication, make derogatory coments targeting our sponsors etc. and dominates the comment section with many untruthful and derogatory posts, that is inappropriate.  I will not waste time further refuting point after point with facts being ignored, only to have  a commenter here continue to claim "bias" and log one attack after another on our publication. If you don't like news sites that offer objective news reporting and a variety of views in the editorial section then go find another news site to read.  Comments on this article are now closed.

There’s a lot of work still to be done. There have been a couple, at least, that have left the White House Cabinet and Staff positions. Some were fired and some resigned. As I understand it McCabe had the authority to both release and share what he did. As much of what is going on, I’m not going to assume one way or another at this point. The Public as well as the White House aren’t privy to much of what’s going on in the investigation. Grassley “suspects” Comey lied.There’s a lot of assumptions being claimed but nothing yet. Perhaps soon we will know. Hopefully we will see that the FBI and Justice Dept. have done the job as they should to sort this all out for our Country.

I can’t and won’t speak to the Justice Dept., facts aren’t in yet, but I never supported Hillary. I never felt she was addressing the real issues we face. I don’t understand the need to lump everyone that doesn’t go along with a particular view as someone that is a direct polar opposite to your and others view and that’s certainly how I constantly read the framing of opposing arguments and conclusions by some here. I did vote enthusiastically for Obama but quickly realized that my fellow White Americans couldn’t handle a person of color being President. Too insecure. If Trump was their response to this fact, they’ve certainly cut their noses off to spite their faces and taken those of us who celebrated our evolution down with the rest of them. Everyone’s loss there. I prefer getting my information from several sources but much prefer those that don’t add all the adjectives and that render themselves opinion pieces rather than facts. I really enjoy Chris Wallace. He is the exception. Appreciate the sharing that the Oath is important. I’ve taken a couple in my life and took them seriously. I also fear that Trump is suffering from some form of Mental Illness. That would not bode well for him, his family, our Country, and the rest of the world that we share with others.

You seem like a reasonable man, Gene. I’d like to point something out here for the sake of argument and it’s something that I find commonplace among the liberal left. You asked me a direct question in what my response would be if our current president were found to be in violation of the oath he took. I gave you a direct, clear answer, even though the question was hypothetical considering the president hasn’t been found guilty of doing any such thing to this point. I then asked you the same question, but got no clear answer in return, you completely skirted and dodged the question, why? The facts are in, maybe you haven’t heard. James Comey lied under oath, to Senator Grassley when ask if he had ever been the source of leaked information, he replied emphatically “No, never”. He later went on to recant his story and said "I asked a friend of mine to share the content of the memo with a reporter,". Andrew McCabe also lied under oath, a minimum of three times and lost his job accordingly. Hillary Clinton, well I could go on for days on that one, but it sounds like we both know the truth there already. You asked a question, I gave an honest answer where you chose to evade.

Sound familiar? That was President Donald Trump's response when asked why he didn't partake in daily press meetings.

Regardless of your political beliefs, that was a phrase that you would never hear an intelligent person say. When people boast constantly about how smart they are, they lack self-confidence, feel inadequate, or are seeking validation from others. Truly intelligent people don't brag about themselves. They let others do the bragging for them.

Contrast that statement from President Trump to Stephen Hawking when asked what his I.Q. was, "I have no idea. People who boast about their I.Q. are losers."

You sure got me there!

What was the purpose of your post in the first place, to try and insinuate that our commander-in-chief was unintelligent? Why, so that you can appear intelligent? Remember when Obama misspelled "R-S-P-E-C-T." during his tribute to Aretha Franklin? Or how about when he referred to Hawaii as "Asia" during his press conference outside Honolulu? Did you go online and insult him too? I doubt it. We could spar all day and night over poorly chosen words, or incorrect statements and where would that get us? We live in an imperfect word, full of imperfect people who say things imperfectly. Thats why actions speak louder than words, which was my point. Honestly, I don't blame Trump one bit for avoiding the press conferences or the WHCD, attending either would be the equivalent of going to a restaurant knowing you were going to get food poisoning. Makes no sense, and that shows intelligence.

Go back to the kiddie pool, this is the deep end.

Should it be proven that he has violated that Oath of Office. What then?

If the oath was violated, then he should be subject to impeachment, that is the law. Having said that, no proof has been shown to date that he's done any such thing. Now I put the question back on you, Hillary Clinton took an oath, James Comey took an oath, Andrew McCabe took an oath and I could go on but you get the idea, they all factually committed crimes, What now? You can't have it both ways, which is what the left always seems to think they're entitled to. There has been so much proven corruption on the left from the Clinton's and their ilk, that not one person on the right will believe anything negative that comes out of the Mueller investigation, you folks dug that hole yourselves. We need an investigation to investigate the investigation, its ridiculous. Remember when people were innocent until proven guilty? On another note, have you noticed how the moderator has deleted all of our previous comments? So much for free speech and the whole "non-partisan" statement. This is the typical reaction from the left, if it doesn't fit or support your narrative it can't coexist. Absolutely proves my point too.

which violates our site rules, including name-calling against our hard-working reporters and staff.

Readers are welcome to share diverse views but we do insist on civil discourse.

Can't do any worse than ALL of the prior administrations. The stuffed shirt know it alls have accomplished ZERO since the truce.