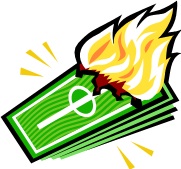 Evidently, Cal Fire began squirreling the dollars away in 2005, in a fund operated by the California District Attorneys Association; dollars which came from successful legal proceedings against California companies found negligent for sparking massive wildfires.  In fact, one of the largest payouts came from San Diego’s Sempra Energy, due to downed power lines that triggered a wildfire and destroyed nearly 1,300 homes in 2007.

Cal Fire has since used these “off the record” funds to pay for such as digital cameras, evidence sheds, and even a staff training retreat at a Pismo Beach resort.

While $3.5 million may seem small potatoes when compared to the $54 million that the Department of Parks and Recreation stashed over the last ten years, we cannot ignore that this is “other people’s” money.  What lands in the coffers comes right out of your pocket and should be treated with the utmost of respect.  That said, while there is technically nothing wrong with a state agency using money to pay for equipment and staff training, it becomes an outrageous example of a disconnect between the bureaucracy and the people of a state when money is being misreported or stashed away intentionally all while taxes and fees are concurrently on the uptick.

These incidents would not be so intolerable if there were some guarantee that this would not happen again, but there has not been even a mention of the Democrats holding a single oversight hearing for either of these agencies.  State Parks officials were basically pardoned from being prosecuted regardless of their intentional fraudulent activities. Even though the Cal Fire money scandal headlines are fairly recent, I would bet that these officials will not be brought in for an oversight hearing either.

Cal Fire and their colleagues in the Parks Department have forgotten who pays their salaries and budgets: it is you – the taxpayer. If these agencies were fully transparent about the source of their funding and where the money actually goes, a fire tax would not have been necessary.  New taxes simply give bureaucrats a license to spend – especially in an environment with zero accountability.

So what is the solution?  Californians deserve better than the status quo – and growing the government to create another watchdog agency is not the answer. We need internal reform that deters this type of activity – one where there is an accounting for every dollar of the state’s budget - right down to nickels and dimes.  And, officials who knowingly hide state funds in clandestine accounts, for whatever reason, should be prosecuted to the full extent of the law.  It is my intent to play an active watchdog role in the State Legislature and I encourage my fellow legislators and every citizen in California to join me in seeking transparency in state government to ensure we know where every tax dollar is being spent.  After all, it’s your money.