I was sent this link to an article about Friday’s events:  http://www.eastcountymagazine.org/node/13831. It seems to me that the article is more balanced that the UT coverage. The article has a link to the audio of both the Filner and the Gloria speech.

Bob was an elected mayor, stepping down to avoid losing all of his personal savings and wealth to legal fees and settlements. His message to his constituents deserved to be printed in the UT as a complete transcript. (I would have liked to have been able to cut and paste from the transcript, which I assumed would be published.) But I forget. The UT is no more a newspaper than Fox News is a news channel. The UT’s purpose is not to inform but to persuade. There are parts of Bob’s speech which the UT does NOT want you, or others, to hear.

As an environmentalist, I want to point out the following, where the times corresponds to the audio link contained within the East County Magazine link shown above:

The link to the audio is contained in the link provided above. Take a listen. It is short.

Anyone that took a public position of wanting Mayor Filner to resign had a responsibility to read the City Charter’s Section XV. Here is the link to the Charter: http://docs.sandiego.gov/citycharter/Article%20XV.pdf

Todd claims that he is going to “Assume the role of Mayor.” Yes, sort of like in a high school play. He will pretend. Actually, here is the key paragraph as to what Todd Gloria can and can’t do:

During the period of time when an appointment or election is pending to fill a vacancy in the Office of Mayor, the presiding officer of the Council shall be vested with the authority to supervise the staff remaining employed in the Office of the Mayor, to direct and exercise control over the City Manager in managing the affairs of the City under the purview of the Mayor and to exercise other power and authority vested in the Office of the Mayor when the exercise of such power and authority is required by law. This limited authority would include circumstances where the expeditious approval of a legislative action is necessary to meet a legal requirement imposed by a court or another governmental agency. Such limited authority would not include the exercise of the power of veto or any other discretionary privilege that is enjoyed by a person appointed or elected to the Office of Mayor. The presiding officer, while acting under this section pending the filling of a mayoral vacancy, shall not lose his or her rights as a Member of the Council.

This idea that Mayor Filner could resign and everything would be fine is what we have been led to believe by the UT. Besides this, the election will cost the city up to $6M. What happened to fiscal conservatism? The UT supports a $6M expenditure if it fills their need?

When sexual harassment is alleged, there are two things that should perhaps be done. First, crucify the alleged harasser. We seem to have done that pretty well. Second, we need to take a critical look at the sexual harassment policies of the City. I haven’t seen much of that. Now that Bob is gone, I hope some of those that wanted Bob out will talk about this.

Government here takes great pride in “doing more with less”. Do everything “on the cheap.” (How would the NCTD, under Supervisor Bill Horn’s leadership, know that their “on the cheap” consultant would not anticipate that the Sprinter’s break discs would need to be replaced? I mean really. Breaks wear out? Who knew?) There was no law in place that Mayor Filner and his staff had to have the training done before some date or pay a fine per day, beyond the date. (They all took the training, on line, for the first time, AFTER the first press conference.) The alleged victims seem to have not gone to the City with complaints. Were they informed they could complain? My company urged us to complain and even had a Sexual Harassment Hot Line, for the case where the victim does not want to confront the harasser. The first thing the victim should do is at least tell a co-worker and write it down.  City Attorney Aguirre and City Attorney Goldsmith have had the responsibility to protect taxpayers from losing large lawsuit settlements. It seems that City Attorney Goldsmith walks on water, in the eyes of the UT. No one is that perfect and I don’t think the City’s sexual harassment policy was that strong. I wish Gloria Allred would bring this out. But I think it will all be done behind closed doors. People might talk. At this point and on this question, they don’t want talk. The city attorney will pay a lot of taxpayer money to keep everything behind closed doors, I fear. We will see. I hope I am wrong.

Our young people may pay the ultimate price. We have very few climate realists in positions of power. Losing one really hurts. I hope that those that played a part will now work extra hard on climate issues. The climate clock is ticking: 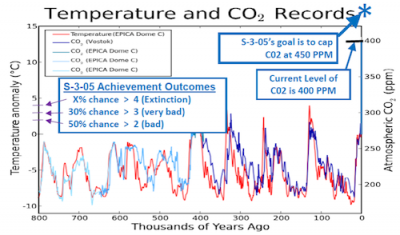 Note that Todd Gloria and the other “conventional wisdom” politicians have no intention of even finding out what it would take to achieve S-3-05. SANDAG’s EIR for their RTP was ruled to be “impermissibly dismissive of S-3-05”. (Council President Gloria sits on SANDAG and he never complains. Filner always complained.) Thanks again to Duncan McFetridge for helping to get a lawsuit filed over SANDAG’s Regional Transportation Plan.