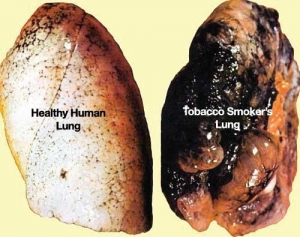 Most tobacco products are laden with additives - including additional nicotine - which enhances their addictive properties.

If these products were all natural, then perhaps people would have an actual choice to continue using them, or not.

It takes just a few times of experimenting with smoking to become addicted to cigarettes; this I can say first hand.

As a youth I began at age 15, and quickly became addicted, not quitting (with much effort) until around 45 years old.

Thirty years of inhaling this deadly, toxic mix of tobacco and chemicals did permanent, irreversible damage to my body. The lungs were just a start.

Faring better than many others, including several family members who have died from smoking related causes, I’m happy to say that my lungs have returned to a near normal function after nearly 15 years of choosing not to smoke anymore.

Another benefit of quitting smoking, besides better overall health, is saving a lot of money that otherwise would have literally gone up in smoke. I can’t even calculate exactly how many thousands of dollars I spent on something that was slowly killing me.

Somewhere around $70,000 over 30 years , averaged out. Cigarettes were cheaper then. The cost is much higher these days, in so many ways…

Think about that - smokers are paying a faceless, greedy entity to kill them! The joke’s on us, right? I’m not laughing…

Gone, is the foul stink from burning tobacco saturated in my home, and clothing, plus the bad breath.

Something I could not forestall and did not foresee was losing most of my teeth. Yes, smoking contributes to gum disease and tooth loss. I try not to smile anymore. Sad but true. Eating can be challenging as well.

Yes indeed beautiful people, smoking, the habit that keeps on giving long after you quit. Don’t forget the additional wrinkles on the face, these will enhance that aged look.

Think smokeless tobacco is better? Think again. Think cancer of the mouth, throat, even the brain.

Nicotine is deadly folks. In any form, and any method of consumption.

Tobacco users have no real choice to use, or not to use a given product once they are addicted. They become a controlled subject.

This is not a freedom of choice for most people, it’s deception at its best.

As a non - smoker now, I feel very strongly that some regulations are indeed a necessity, because far too many smokers seem unable to control their habit and where they share the foul, toxic, smoke.

Asking a smoker to go elsewhere is usually met with a verbal altercation. Often the person touts their right to smoke, even in areas with signs or laws indicating no smoking.

I agree a person may have the right to partake of this substance - yet I do not agree that a non - smoker should be subjected to a foul smelling, known carcinogen by someone who could care less.

They have no right to blow smoke on me.

I think having laws dictating where to smoke or not is absolutely the right thing. Having smoke free areas is paramount to those of us who wish to be smoke free and healthy.

Laws help govern those individuals who are not polite, aware of other peoples needs and seem incapable of controlling their aberrant behavior.

Seems to me that a polite smoker would abide by the law and respect others rights as well, including those who have no voice in the matter – children--instead of acting much like a petulant child oneself.

Personally, I think the existing anti smoking laws that are in place in El Cajon and elsewhere need to be more strictly enforced. I see people smoking blissfully everywhere I look. At the parks, in front of restaurants and stores, coffee shops, downtown benches, and…

Also, cigarette butts liter the ground and our environment is suffering.

Someone who is bothered by a smoker enjoying their tobacco, should absolutely have a right to have clean air to breathe and be able to ask that person to smoke elsewhere.This is not a debatable issue. It’s common sense.

I too am in favor freedom from government intervention as much as can reasonably be accomplished. Yet when some people cannot or will not control undesirable behavior which affects others, especially in such a negative manner, then government intervention becomes critical at some point, and is deemed necessary for the common good.

First hand smoke, second hand smoke, third hand smoke, it’s all toxic and potentially deadly. It can be readily absorbed into the human (and animal) body via the lungs and skin.

Some deadly effects on the human body from tobacco use include: a variety of cancers, heart attack, stroke, COPD, hypertension, etc.