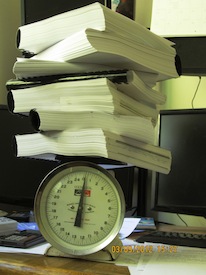 I just mined the Ocotillo project's Environmental Impact Statement issued before the project was approved. The document's job is to predict the project's impacts.

On noise: “Under this worst-case scenario the wind farm would be considered an acceptable land use and…would meet the Imperial County daytime and nighttime noise limits. (p. 4.9-7).

On light pollution: The EIS obviously was not written with the red lights in mind. From the EIS: “…is not expected to create a new source of substantial light…”, and, ‘…significant night lighting impacts are not expected.” (p.4.18-8). Then for mitigation: “all permanent exterior lighting … lamps and reflectors are not visible from beyond the project site…” (VR-2 on p. 4.18-18)

When the EIS was released, I described it as twenty-five pounds of tortured justification (see photo of EIS). It has turned out to be fraudulent in addition. I am looking forward to learning of the power produced after a year or so of operation, hoping it shows at least some of the environmental and human cost has been worthwhile.

At my home in Los Angeles I don’t feel the effects. I only feel for the residents of Ocotillo.