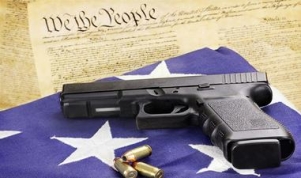 In depraved acts of self-centered posturing, politicians who do not respect our Constitution are leveraging the recent tragedy in Las Vegas to push for more unconstitutional bans and restrictions on common, semi-automatic firearms, ammunition, and accessories.

These important Second Amendment-protected instruments are possessed and responsibly used for lawful purposes by millions of Americans across our great nation.

Just like modern blogs and websites are protected by the First Amendment, and the right against unreasonable searches and seizures applies to iPhones, too, are modern sporting firearms like AR-15s and their appurtenances.

History shows that gun control is a one-way ratchet, with so-called “compromises” resulting only in more laws that affect law-abiding people and fewer ways to exercise Second Amendment rights.

FPC opposes all restrictions on the acquisition, possession, carry, and use of common, semi-automatic firearms, ammunition, and accessories by law-abiding people.

All unconstitutional laws are unjust, illegitimate, and offensive to the rule of law—even if they are enacted in response to a very real tragedy.

Law-abiding gun owners will not be bullied by killers or politicians, nor will we give up individual liberties at the shrill cries of Marxist Democrats or unprincipled Republicans, wealthy Hollywood elitists, the alt-left news media, or billionaire-backed Astroturf groups.

Responsible policy is made by first respecting constitutional boundaries, and then by methodically addressing a problem with thoughtful analysis and unemotional information.

Whatever the conversation our country might have about the evils found in human nature, the answers will not be found in additional emotion-driven gun control regulations.

FPC calls on House Speaker Paul Ryan, Senate Majority Leader Mitch McConnell, and every member of Congress to do the job they were elected to do and pass important legislation to protect and advance Second Amendment rights without further obstruction or delay.

Firearms Policy Coalition (www.firearmspolicy.org) is a 501(c)4 grassroots nonprofit organization. FPC’s mission is to protect and defend the Constitution of the United States, especially the fundamental, individual Second Amendment right to keep and bear arms.