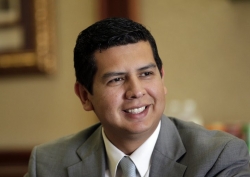 I was not an early supporter. I backed Nathan Fletcher in the primary and was not initially happy with Alvarez' victory.  I felt he was too young; too tied to the left-wing of the Democratic Party; and would not be able to defeat Kevin Faulconer and the downtown lobbyists.

Faulconer is a personal friend going back to our days at SDSU and then working for Democratic consultant Bob Glaser in the Summer of 1990. I like Kevin and think he is an honorable man, but his political values and ideology are far too tied into big business interests and the downtown power-brokers for me to ever consider voting for him.

I thought Fletcher would make a fine mayor and still do. But now I see that Alvarez is the man for the times we live in and the man best prepared and able to do the job as our next mayor.

David Alvarez' story is the story of San Diego that too often has not been told.  We love to focus on the history of the great, wealthy men who made the city - Alonzo Horton, John D. Spreckles, George Marston, and Ed Fletcher. When Pete Wilson was mayor of San Diego, he provided sound management and leadership for his day that helped San Diego avoid the urban sprawl of Los Angeles.

But the time has come for a man of the working people of San Diego. A man who understands the population that gets up every morning, works hard for modest wages, and will never have statues or awards presented to them for their labor.

The time has come for San Diego to move into the 21st Century with a new generation of leadership not tied into the old, stale models and old, stale ideologies of the past.

A man whose values were formed in the hard work and hard streets of the San Diego so many have sought to pretend did not exist.  The San Diego that nobody will build hotels or offices or monuments around, but where the labor for those projects comes from.