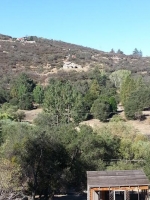 Photo: View of Oak Creek/Boulder Creek area taken by Cynthia Burnham from her home, where she reports seeing an SDG&E helicopter hovering "very low" for at least 10 minutes.

August 31, 2014 (Boulder Creek)--Several residences and visitors to the Cleveland National Forest lately between Descanso and Julian in the Boulder Creek area have complained about low flying helicopters.  These were seen hovering over people's back yards by only a few hundred feet. Subsequently we are to learn in the East County Magazine that several other residences identified the helicopters belonging to SDG&E, also experienced this to the point that horses were so frightened that they were injured.  One of the helicopters seen by several residences along Boulder Creek Road had a visible camera on the front  and apparently was not necessarily  in line with the ROW (right of way) for the TL626 line.

It is my understanding that this line is supposed to be reviewed ONCE A YEAR and maybe more if there is significant weather.  The constant harassment by SDG&E on locals as well as annoyance to visitors has the appearance of being excessive.  This latest  is crossing a boundary on many points.  When it gets to the point that this corporation can terrorize people in their homes, a serious boundary is being crossed.  It is high time that the public is told the truth about whatever they are up to that would necessitate this intrusive behavior. The level of  public outcry is reaching a new level.   Please investigate the necessity for their  constant intrusion on people's lives as well as the constant presence in the Forest and Sky, and the drag on our foresters time.

According to the East County Times SDG&E claims they are reviewing poles and need to do more. Well this seems to be the ongoing line month after month after month.  These are all new as of the Cedar Fire and many the Witch fire. The entire conductor was replaced two years ago.  Just how much reviewing do they need to do to keep a line safe?  They are out there ALL THE TIME!!   If the line is so tenuous as to require constant monitoring than it doesn't need to be there. Get it underground if it is so unsafe that they have to be there scaring and harassing everyone in the area.  Likewise, this has all the appearance of a racket to create work at rate payer expense, (or someone who is scoping for upcoming hunting seasons),  and not efficient management of this line.

I've said it only hundreds of times but I will continue to do so, this line needs to be removed and the remaining 12kv needs to be underground or better accommodated with solar and removed as well.   Prior to the Sunrise Power link we never saw this level of intrusion.  Since then it has not stopped.  Much of this region is now recommended for federal Wilderness status; these actions are beginning to raise concerns of retaliation as well.

Please investigate! Given the effect this has already clearly demonstrated on every creature living and enjoying the Forest, please suspend SDG&E's activities in the area immediately until they can dignify a process and  plan  that can coordinate their behavior and the behavior of their vendors appropriately. That we volunteers have to expend so much of our time and resources to have to monitor a PUBLIC utility has become ridiculously demanding on us who care about the Forest rather than a public utility who should be responsible enough to not have to be monitored at all. But apparently they do. If this continues to vex our lives I'm about to raise issues if we should start billing for our trouble! It is a considerable ongoing impact to our lives. It goes on and on for what has now become years!  It is high time that this corporation have its activities put into perspective with the rest of us. Please dig deeper this time, investigating the mind set of a helicopter pilot that some how thought this was ok:  Why did he? Who coordinated? What process, if any?  What training what briefing what guidelines what notice is happening by SDG&E because clearly it was not thought out or just plain negligent and entitled.

I remind you that SDG&E has already been accused of having a pilot that chased Eagles in the El Monte area. On Thanksgiving two years ago FERC was flying right in residences back yards supposedly "surveying" yet again, we can only wonder if they chose a Federal Holiday to avoid federal review by the Forest Service. I have not stopped and won't for documenting the erosion and silting issues they create semi annually yet it continues. They do not seem to take the public sector seriously. In 2002 a low flying helicopter hit a power line and started at that time one of the largest fires in local history, the Pines Fire, which got national attention. Yet they feel it appropriate to fly at tree top level?

I support any and all requirements the USFS puts on them to check in before conducting operations in the Forest.  SDG&E may think it a hassle but they have likewise demonstrated time and again they can't rein it in on their own. The USFS is completely in their right to insist and I support as much as they find necessary.   By the same token while an entire Federal Agency can insist that SDG&E follow appropriate guidelines in the Forest, it is unreasonable to expect individual land owners to have equitable power and leverage to keep these little invasions on their lives at bay.

One more time I point out that SDG&E's remaining infrastructure needs to be 100% on USFS lands just off of the existing Boulder Creek Road and not on private land for this very reason. SDG&E takes miserable advantage of their power over land owners where Forest Service jurisdiction doesn't apply.   Asking private land owners to have to endure this is over the top when apparently they feel entitled to violate the most basic constitutional laws of right to privacy.  Additionally as demonstrated by this injured horse who is at least domesticated, contrast to animals that are wild,  their constant presence in the air has no regard for wildlife and is not healthy for the animals in the forest.  At the frequency and altitude they chose to maintain they must be violating FAA rules as well as opening up a host of environmental issues as well.

I look forward to a response.  Thank you for looking into these concerns.  Thanks to you our public servants for all you do!