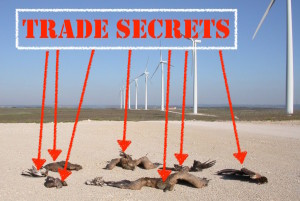 By Mark Duchamp, Save the Eagles International

September 12, 2016 (San Diego's East County) - News of bird and bat deaths at wind farms have reduced to a trickle. Does that mean that a solution has been found? Yes, it has, but it's not what you think. Wind turbines are every year more numerous and the massacre they cause is ever increasing. What has changed is that the cover up is now effective at 100%, or just about.

The following news sheds light on the latest technique for making mortality data unavailable to the public (and the media):

Yes, you read correctly: "releasing (the wind farm's) bird and bat kill reports would provide "trade secrets" to its competitors”. Surrealist, isn't it? But that's only one of the many lies we must deal with when investigating that hugely subsidized industry. Below, we present the "trade secrets" they are trying to hide:

Indeed, in present day United States, mortality data legally belongs to wind farm owners and the public has no right to see the numbers without their permission. This is the "solution" that has been found for covering up the butchery of eagles, cranes, pelicans, condors, swans, swallows, bats, owls, falcons, hawks, geese, gamebirds, songbirds etc.

Throughout the world, ever since shocking mortality statistics at wind farms made the news 15-20 years ago, efforts have been made by the wind industry and complicit governments to hide the numbers. In the UK for instance, wind farms have long stopped being monitored for mortality; in Spain, the monitoring has been done, but the reports were filed away without publishing; elsewhere, whenever a wind farm had to be checked for mortality, its owner would select ornithology consultants based on their reputation for "cooperation" - i.e. whose reports always showed "manageable" numbers. This is still the preferred method for covering up in some countries, e.g. Canada or Australia.

To make it even safer for European wind developers, and regardless of the proclaimed right of the public to be informed on environmental matters (Aarhus Convention), reports concerning wind farms' impact on birds and bats were soon stamped “property of the developer," meaning that he may edit them before publication. "The wind companies rewrite all ecological work themselves," said to me by a UK ornithologist who had worked for wind developers. But a non-disclosure clause in the contract kept him from revealing publicly what he knew and what he saw. This is now standard practice in wind farm monitoring contracts.

Thanks to these various methods to hide the evidence, high mortality numbers soon disappeared from the headlines, and the public lost interest, trusting large ecology NGOs and bird societies to watch over protected wildlife. However, conflicts of interests oblige (i.e. $$$), these organizations keep denying that significant harm is being done to biodiversity. For instance, none of them has published the report by the Spanish ornithological society revealing millions of deaths a year in Spain. Yet it is based on 136 monitoring reports obtained from the Spanish government under Freedom of Information legislation.

Granted, the particularly deadly Altamont Pass wind turbines kept coming back in the news now and then, but the media has become so gullible (or complicit) that even their repowering for another 25 years didn't make waves.

The issuing by the US administration of "incidental take permits", allowing wind farm operators to kill a number of eagles accidentally, did cause anger among bona fide conservationists, especially as wind farm operators can easily hide the real number of eagles they kill. But this scandal didn't make the evening news on television. Most NGOs don't really mind: there is no money in protesting, but plenty of it to be reaped from Big Wind, awash as it is in subsidies.

In Scotland, an issue that could become a hot potatoe is the census of golden eagles. Originally due in 2013, this politically-sensitive 10-year survey was postponed to 2015, and to date we are still waiting for its publication. Cynics are suggesting that it takes time to doctor the figures and edit the text, which would otherwise reveal a sharp drop in the Scottish golden eagle population, coinciding with the period when the moorlands were invaded by wind farms.

Coincidence or not, a report just surfaced in Edinburgh, reassuring the Scots on the fate of their beloved eagles. Wind turbines may be installed near eagle nests, it claims, provided ornithologists are paid, during the life of the wind farm, to feed the eagles and monitor their behavior. It's pure rubbish, but it keeps ornithologists and bird societies happy. Officially, they are the ones who “know” about birds, and their opinion is taken into consideration by the authorities; so it's important for the wind lobby to keep them cheery. In reality, we know that wind turbines attract (and kill) eagles, as they do other raptors, swallows and bats: read Biodiversity Alert. In short, the new report is just another one of many biased, misleading studies financed by wind interests. If you read the press article till the end, it actually claims that Beinn an Tuirc wind farm helps Scottish eagles survive. Yes indeed, the bigger the lie, the more people will believe it.

The population survival issue was tackled differently in the western United States: the golden eagle census was carried out from a plane. Obviously, scientific rigor was lacking: seen from an aircraft, it is easy to mistake a juvenile bald eagle for an adult golden eagle. The wind coalition used this worthless census to report a "stable golden eagle population" in the western States. Different methods, same misleading result.

One of the countries where the cover up wasn't achieved at 100% is Australia. Mortality at the infamous Woolnorth wind farm apparently ceased being reported to the public, but a few months ago, that of the Macarthur wind farm hit the news, causing concern worldwide.

More recently, another Australian wind farm discreetly announced (you have to search their newsletter thoroughly - page 2, paragraph 3) that it was killing many eagles: Bald Hills wind farm - 7 eagles killed in 4 months. Seven in four months is the official figure, so the reality could be even worse. It's also a good indication that, as revealed by Save the Eagles International, raptors are attracted to wind turbines (and then killed). But don't be surprised that, in spite of the evidence provided in STEI's article, bird societies completely ignore this lethal attraction exerted by wind turbines: it would hurt the wind industry if they recognized it. Here you can, again, appreciate the hypocrisy surrounding the whole issue.

Finally, the cover up is naturally helped by scavengers, which become rapidly aware that wind turbines provide easy food in the form of dead or injured birds and bats. So they make the rounds daily, mostly at night or at dawn when their chances are best. Searchers employed by consultants rarely start their work as early as foxes and crows, so they miss most carcasses. In addition, they visit the site once every week at best, leaving plenty of time for scavengers to clean up the grounds.

That is how the company operating Bald Hills WF, above, can claim they only found 19 bird carcasses (assuming the figure wasn't simply doctored). You'll note that there were 7 eagles among them: typically, small carcasses disappear whole, while larger ones often leave some remains behind. Some wind farm operators instruct their employees to bury the evidence, but some carcasses can escape their vigilance, given the very large surface to be searched, and the vegetation.

At Altamont Pass, California, Dr Smallwood estimated in 2004 that 116 golden eagles were being killed yearly by the 5,000 (small) wind turbines (1). These mostly young, wandering eagles, were from California, the western United States, and even Canada. The massacre will continue as new, bigger turbines replace the old ones. The "green" NGOs don't really care - do we hear them protest? The killing is now legal (incidental take permits), and that keeps the operators out of trouble if some eagle carcass happened to be discovered by a member of the public. The wind industry wins. The extermination of eagles, hawks, falcons, cranes, swallows, owls, bats and other highly valued species may continue unabated.

– adjusted for search detection and scavenging: 116.5

DEVELOPING METHODS TO REDUCE BIRD MORTALITY IN THE ALTAMONT