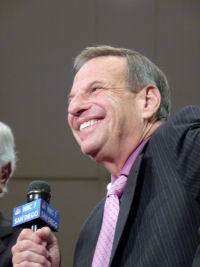 January 13, 2013 (San Diego)--Regarding the saga of the Filner foibles as per our Mayor's temperament in being a political leader: So our Mayor is again dusting it up in San Diego's local arena, this time with the City Attorney and fellow Democratic Councilman Todd Gloria. In philosophical parlance, the hysterical personality being those stigmatized souls overcome with emotion, are most often viewed as being associated with truth. Not to mention the so-called myth of control so hypocritically misunderstood in our society.  Mayor Filner's emotions with regard to governing our fine city ought to be judged in context to all of our moral and ethical contradictions.

Mr. Filner saved my home from foreclosure, saved my Father's VA pension, called me at home to offer help when he was in Congress and got me elected to the local Democratic County Committee.

The citizens of our city ought to be more concerned and outraged that a golfer named Tiger Woods is participating in San Diego's premier sporting event. Where are our priorities? Give Bob Filner a break and go do some good deeds instead of sitting in the arena.