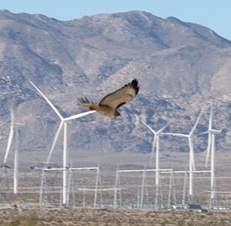 "New studies reveal ... that in the United States alone ... wind turbines kill an estimated 13 million to 39 million birds and bats every year” (there are about 39,000 wind turbines in the US)

January 31, 2013--The worldwide slaughter of birds and bats by wind farms has been confirmed by biologist Clive Hambler, who teaches at Oxford University:

"Every year in Spain alone — according to research by the conservation group SEO/Birdlife (the Spanish Ornithological Society, or Sociedad Española de Ornitología, the counterpart of the RSPB in Spain - ed) — between 6 and 18 million birds and bats are killed by wind farms. They kill roughly twice as many bats as birds. This breaks down as approximately 110–330 birds per turbine per year and 200–670 bats per year. And these figures may be conservative if you compare them to statistics published in December 2002 by the California Energy Commission: ‘In a summary of avian impacts at wind turbines by Benner et al (1993) bird deaths per turbine per year were as high as 309 in Germany and 895 in Sweden.’

"Why is the public not more aware of this carnage? First, because the wind industry (with the shameful complicity of some ornithological organizations) has gone to great trouble to cover it up — to the extent of burying the corpses of victims. Second, because the ongoing obsession with climate change means that many environmentalists are turning a blind eye to the ecological costs of renewable energy. What they clearly don’t appreciate — for they know next to nothing about biology — is that most of the species they claim are threatened by ‘climate change’ have already survived 10 to 20 ice ages, and sea-level rises far more dramatic than any we have experienced in recent millennia or expect in the next few centuries. Climate change won’t drive those species to extinction; well-meaning environmentalists might."

A poem says it in different words:

More on the real mortality caused by windfarms:

Wind turbines will cause the extinction of many bird and bat species, while failing to solve our energy problems - because of their intermittency, uncontrollable variability, and cost.

Something is very wrong with us as a people if we allow wind farms to killf birds and bats by the MILLIONS!