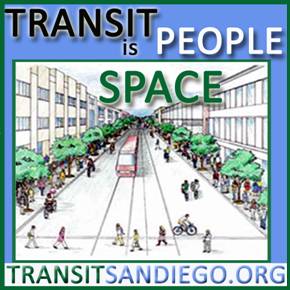 The report, prepared by transportation expert Norman Marshall on behalf of the Cleveland National Forest Foundation, says outdated assumptions are driving the San Diego Association of Governments, or SANDAG, to prioritize highway projects that increase car use and air pollution. These assumptions buck established trends among younger Californians, who tend to drive less and are more inclined to live in compact urban areas than older generations.

Titled “The 50-10 Transit Plan: Quantifying the Benefits,” the report explores a number of social, traffic and land use models and finds they all point to the same conclusion: transit is critical to San Diego’s future. By prioritizing transit spending over the next decade, the report says, the San Diego area could accommodate an anticipated 31 percent population increase by 2050 while decreasing automobile use and air pollution.

Given recent legal challenges, SANDAG should consider reassessing its $200 billion long-range transportation plan for the region. SANDAG’s existing plan front-loaded the expansion of freeways, which will lead to sprawl and reinforce the region’s dependence on cars. That plan’s heavy reliance on automobile transportation will also lead to increases in greenhouse gas emissions, even though state climate policy and science demand significant reductions in these pollutants.

The best way to address those traffic and pollution problems, the new report says, is with a plan that would implement 50 years of transit improvements in the urban core over the next decade. That would allow the San Diego region to create a comprehensive, integrated transit system that would support a shift to more compact, walkable communities.

For more information about the new report and the Cleveland National Forest Foundation’s climate-friendly transit plan, go to http://www.transitsandiego.org/50_10_transit_plan. The new report was made possible through a grant from the Ford Foundation supporting the Transportation Justice Partnership with the San Diego Environmental Health Coalition.

The Cleveland National Forest Foundation (www.cnff.org) is made up of private citizens who believe that action must be taken to protect the remaining undeveloped lands in the forest and that sound regional planning to build sustainable, quality urban communities is fundamental to saving the integrity of our wilderness areas. The opinions in this editorial reflect the views of the author and do not necessarily reflect views of East County Magazine. To submit an editorial for consideration, contact editor@eastcountymagazine.org.

...last I heard 95% + of the commuters do NOT take mass or rapid transit in San Diego.
Rapid transit (trolly, subway ) only works in vertically integrated cities. New York, Boston, London, Tokyo.
Speaking of Tokyo, lots of mass and very rapid transit. Key is LOTS!
Spread out California needs buses to make any transit work. Lots and lots of buses. Buses to go 10 blocks to 5 miles. Buses to take you to the trolly station and back home. Lots and lots of buses. Running 7 days a week 24 hours a day. Now, WHO is going to pay for all these buses? Or deport the 20% of the population living here ILLEGALLY, 20% of the problem solved. Problem is no one in power has the guts to do either. Result the transportation problem in Southern California will NEVER BE SOLVED!

We have always been a car culture. The trolly doesn't go where I want to shop. Wait for a bus? Never. There's no such thing as pedestrian friendly communities. Pie in the sky.